Native New Yorker and mountain climber Grace Leach was born near this site in 1906. In 1937, she became the first woman to climb all 46 High Peaks of the Adirondack Mountains. She was a pioneer in the creation of the ADK Forty-Sixers and many of the traditions associated with the club.

As the youngest of six, Leach was born in Ticonderoga and grew up in the area before moving to Troy, NY to live with her older sister and attend the local high school. A biography written by the Adirondack Forty-Sixers states that while in Troy, she met future husband Ed Hudowalski, who, at the time, was studying electrical engineering at Rensselaer Polytechnic Institute. The couple eventually married September 5, 1926, and once together, Leach was able to share her passion for hiking with her husband. Leach credits her first hike to the state’s highest peak, Mt. Marcy, on August 2, 1922 with sparking her lifelong interest in the mountains surrounding her, stating that after her climb she “never talked about anything but mountains.” It was that intensity that inspired her husband to take a group from his Sunday school class to climb Mt. Marcy in 1932. From that point on, both had become invested in not only climbing the Adirondack High Peaks but promoting the beauty and adventure they experienced to all people.

Not long after, Leach’s short biography states that Hudowalski and Reverend Ryder from Grace Methodist Church in Troy began leading hikes up all of the Adirondacks 46 highest peaks, and after having completed the list, formed a club called the Forty-Sixers of Troy. After the formation of the club, Grace started to keep track of the climbs for members and would encourage them to write about the experience on the mountain, which was the beginning of her “lifelong commitment to maintaining individual climbing folders for each hiker.” The club expanded outside of Troy in 1948, with Leach serving as the first president of the brand new Adirondack Forty-Sixers, Inc.

Leach had completed the 46 on August 26, 1937 after climbing to the top of Mt. Esther, and her biography discusses how she used her experience on the mountains to help guide those that would come after. Along with maintaining records for all of the climbers, Leach also engaged in personal correspondence with those attempting to become a 46er, and in some of the 2,000 letters she would write per year, Leach was never hesitant to share her advice and encouragement. It was important to her that those climbing the mountains contemplate their time hiking and “share that experience with others,” something that is reflected in one of her favorite mottos, “Any mountain worth climbing is worth talking about.”

A pioneer in that she was “engaged in a hobby in which relatively few women participated at the time,” Leach is also noted in her biography as pushing boundaries by holding a high-ranking position in state service. After high school, Leach pursued her interests in creative writing and public speaking by taking night classes before becoming a publicity writer with the New York State Commerce Department in 1945. By 1948, Leach was promoted to Travel Promotion Supervisor and would use her position to write and speak about the Adirondacks and those who hiked its peaks. Leach also used her position to speak out and encourage more women to get outside and believed that it was good “to bring color to [their] cheeks and zest to [their] step.”

In order to commemorate her passion and dedication to not only the 46ers but the Adirondacks, the ADK 46er website states that one of the 46 high peak mountains has been renamed Grace Peak. The name change was approved by the United States Board of Geographic Names on June 12, 2014 after a 12 year campaign, and it replaces the title of East Dix, which had originally been given based on its location to Dix Mountain.

As of 2019, the Grace Leach marker stands near her place of birth in Ticonderoga. 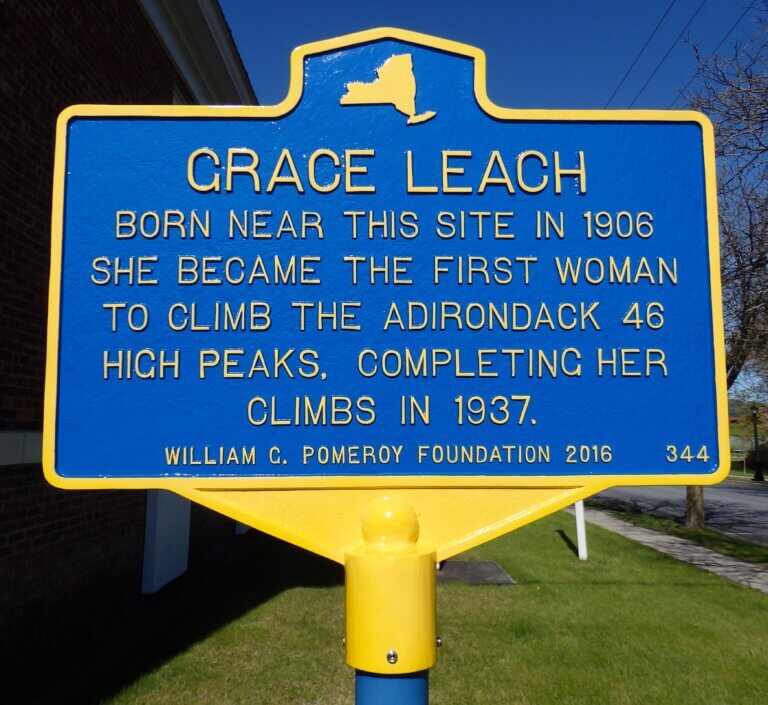 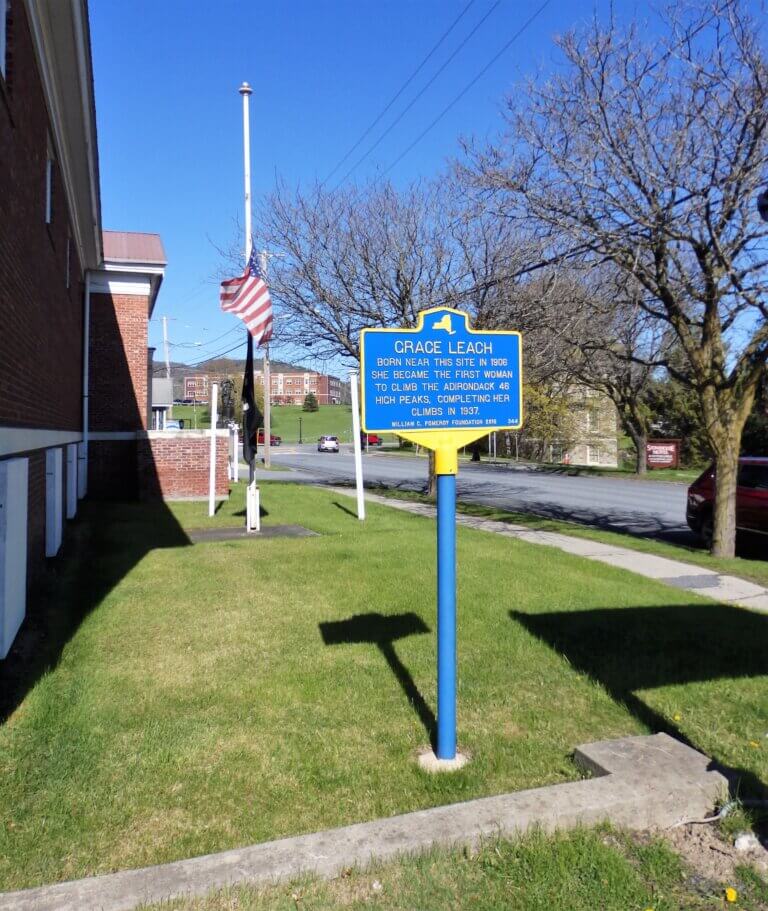