Stephen S. Renfroe (1843-1886) moved to Alabama from Georgia with his family as a child. A recap of his life found on the findagrave.com website reveals that he was a handsome fellow who, upon turning 18 in 1861, enlisted as a private with Company G of the 9th Alabama Infantry Regiment of the Confederate Army during the Civil War. He ended up deserting his post nearly four years later and settled in Butler County, Alabama. In 1865 he married, only to kill his brother-in-law and flee to another county.

Renfroe eventually made his way to Sumter County, which at the time was said to be a hotbed of Ku Klux Klan activity. A summary of the 1972 book, Alabama’s Outlaw Sheriff, Stephen S. Renfroe, by William Warren Rogers & Ruth Pruitt, mentions that Renfroe quickly became involved with the group, holding positions of leadership in 1868-1869. While in Sumter County, he briefly reunited with his wife only to have her pass away under unusual circumstances at the age of 22. He soon remarried however his second wife die abruptly as well. A third wife fared better and avoided the fate of the previous two.

In 1878 Renfroe was elected sheriff. The 1991 book, Alabama: One Big Front Porch, by Katherine Tucker Windham, recounts the striking presence Renfroe made in his community:

They tell how Steve [Renfroe] would ride down the street on his high-stepping white horse looking so fine and so grand that everybody stopped to watch him canter by. Renfroe sat tall and straight in his saddle, and the very first time he rode down the street in Livingston people knew there was something special about him….”

Unfortunately soon after his election, he became “crooked”. According the the local newspaper (via findagrave.com), the Livingston Journal, Renfroe “committed robbery, twice, of his own office – drinking, arson, blackmails, thieving and other almost inconceivable outrages.” Over the course of the next eight years, Renfroe committed dozens of crimes. He would be arrested and jailed, yet managed to escape over and over. Following his final arrest, townspeople were nervous about Renfroe escaping and evading justice once again. On July 13, 1886, eight men stormed the jail where he was being kept, marched him through town and hung him by the shore of the Sucarnochee River. Despite many witnesses to the event, including the jailor himself, no one was identified or charged with the hanging. Renfroe’s body was never claimed, no services were held, and his remains were interred in an unmarked grave. His wife and son left town and changed their names.

According to legend, Renfroe’s spirit, dressed in billowing white robes and riding a white horse named Death, returned every July 13, to the spot of his hanging. As the rider and his mount descended, the sky turned green; the leaves on the chinaberry tree rustled without benefit of a breeze; and the waters of the Sucarnatchie suddenly rippled into mild turbulence – a warning to the wayward. Then Death, spurred by his phantom rider, would gallop upward again, and those brave enough to witness the scene could observe the ethereal figures disappear into the summer sky. 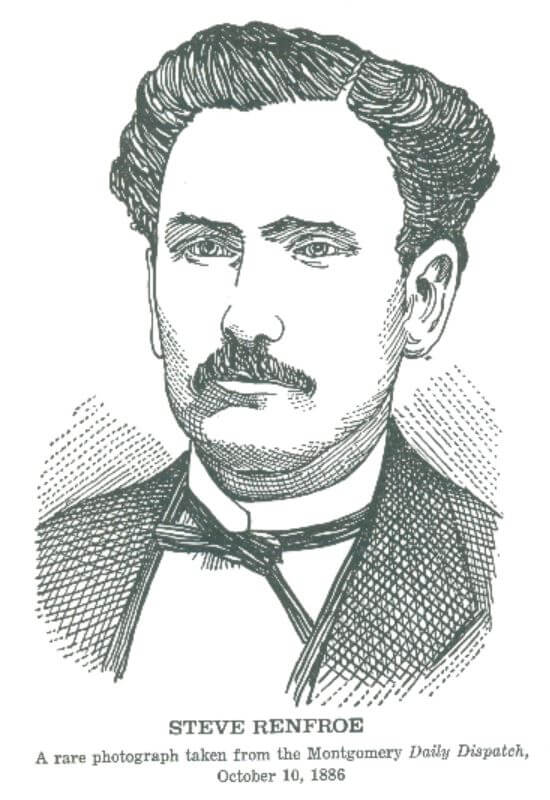