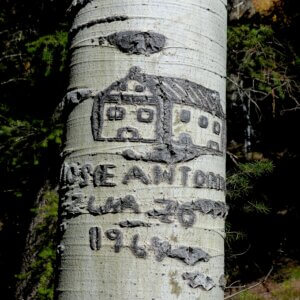 In Idaho’s Wood River Valley, sheepherders of the 20th century would take refuge in the shade of trees on their treks during the hottest hours of the summer months.

During these moments of respite, the sheepherders carved into the bark of Aspen trees, creating a profusion of images and writings throughout the Valley area: Animals, dates, fishing boats, poems, names, soccer teams, art.

Known as the Arborglyphs, these tree carvings typically were created more than 50 years ago. The marks became the calling card of sheep ranchers and herders, the majority of whom were of Basque and Irish decent. Many of these herders ventured to the American West beginning with the Gold Rush, but found employment as sheepherders. 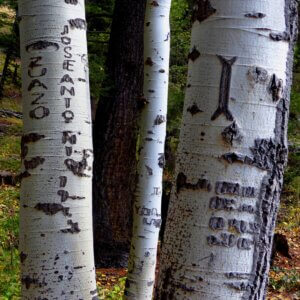 This unique piece Idaho’s heritage lives on in several ways, including through the efforts of the Trailing of the Sheep Festival, which seeks to preserve the cultural history surrounding sheep ranching and herding in Idaho and the West that spans more than 150 years.

To help bring greater attention to the Arborglyphs as an important cultural phenomena in south-central Idaho, the Trailing of the Sheep Festival applied for a Legends & Lore marker grant earlier this year.

“Preserving this special part of our community’s history is very important to us and we are privileged to have received this grant to permanently honor this legacy,” said Laura Musbach Drake, Trailing of the Sheep Festival’s Executive Director. 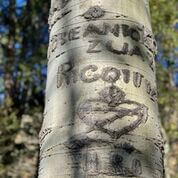 In June 2021, a dedication ceremony was held for the Arborglyphs Legends & Lore marker, which is located adjacent to The Community Library’s Regional History Museum in the City of Ketchum’s Forest Service Park in Ketchum, Idaho. Later this year, the Trailing of the Sheep Festival will be celebrating its 25th anniversary year from October 6-10.

“As the aspen trees grow older and we stand to lose them,  we work to preserve the remaining arborglyphs and their history with the Legends & Lore marker as it will help our community and visitors learn more about Idaho’s sheep herding traditions and keep them alive,” said Musbach Drake.