“Champy,” or “Champ,” is a legendary lake monster said to live in Lake Champlain. There have been over 300 alleged sightings of Champy, dating back to at least 1819, causing it to become a regional icon often used to promote tourism.

It is often claimed that Lake Champlain’s namesake, Samuel de Champlain, was the first to see the legendary creature. The quote cited to prove this is misleading as the French explorer’s journals reveal that he actually was describing a garpike shown to him by his indigenous guides. These fish, specifically the Longnose Gar, are known to grow over six feet long with silver-grey scales and a long snout filled with teeth. (Voyages of Samuel de Champlain, 1878) These particularly large and alien looking fish may certainly have contributed to legends of a lake monster.

The first alleged sighting of a giant sea serpent in the lake happened on July 22, 1819 near Port Henry, New York. At Bulwagga Bay, a man by the name of “Captain Crum” claimed to see an anomalous creature of monstrous proportions. He described it as a 187 foot long black serpent with a head that resembled a sea horse, as well as having “three teeth, eyes the color of a peeled onion, a white star on its forehead, and a belt of red around its neck.” Bulwagga Bay has since been called Champy’s “home base” due to the multitude of supposed sightings. Port Henry has capitalized on the legend by erecting a sign near the bay listing all reported sightings, as well as passing a symbolic resolution in 1981 declaring the lake a “safe haven” for Champ. (Sun Community News, 2017)

The legend caught the public eye in 1873 when the New York Times reported the sensational sighting of an “enormous serpent” with reflective silver scales by a railroad crew, as well as an alleged sighting by a Clinton County sheriff. (Sun Community News, 2017) P.T. Barnum, famed promoter of hoaxes and founder of the Barnum & Bailey Circus, offered a $50,000 prize for anyone who could bring him the hide of the “great Champlain serpent” for his World’s Fair show in 1873. (Green Mountain Freeman, 1873) In 1887 Barnum put up a $20,000 bounty for the Champlain “sea serpent”, dead or alive. He suggested that a search party with boats and Gatling guns be used, presumably to spray the lake with bullets until something longer than 50 feet floated to the surface. (The Post, 1887) These awards were never collected, however. (Sun Community News, 2017)

Champy attracted the spotlight again in 1977 when the most famous photo allegedly depicting it was published. Taken by Sandra Mansi, she claimed to have spotted a creature in the lake while on vacation and hurriedly snapped the photo. Evaluations of the photo in 1981 stated that no evidence of tampering could be found, even if there was also no way to confirm whether it depicted an animate or inanimate object. (New York Times, 1981) This makes it the only evidence to date with even a possibility of being credible. However, inconsistencies surrounding the circumstances of the photo have been noted by skeptics, including that Mansi kept the photo secret for four years before announcing it, she only snapped a single shot of this apparently extraordinary sight, and no negatives exist which could clarify the photo’s accuracy. Many have also pointed out its resemblance to the famous alleged photo of the Loch Ness Monster, the “surgeon’s photo”, which was proven to be a hoax in 1994. (Sun Community News, 2017)

Like Nessie, the lake monster of Loch Ness, Champy is a subject of interest to the proponents of cryptozoology, a pseudo-science revolving around the search for monsters and mythical creatures. Some “cryptozoologists” assert that Champ would be a zeuglodon, an early ancestor of modern whales with a serpentine appearance. More commonly Champy is depicted as a plesiosaur, an ancient aquatic reptile which likely existed over 200 million years ago in the Triassic period until the Cretaceous period which ended with the mass extinction of the dinosaurs approximately 65 million years in the past. Sightings of Champy have described the creature as anywhere between 10 to 200 feet long, with an appearance ranging from serpentine to having a head resembling that of a dog’s. (Sun Community News, 2017)

A number of explanations for Champy sightings has been offered. The most common and likely the most plausible is that large fish, such as sturgeon or garpike, are mistaken for the sea monster. (Sun Community News, 2017) Some scientists have explained that temperature inversions caused by lake water chilling lower layers of air can cause visual distortions, called ‘superior mirages’. These can cause mundane sticks, shadows, swimming dogs, or other floating objects to appear elongated or much larger. (New York Times, 1981)

Regardless of their provenance, sightings of Champy and the legend that surrounds them have been embraced by many in the Lake Champlain region as an attraction for tourists and a fun symbol of community pride. The State of Vermont passed a symbolic resolution protecting Champy in 1982 (Sun Community News, 1982), and New York passed a similar resolution encouraging citizens to photograph alleged sightings the next year. (New York Legislative Record and Index, 1983) In 2005, the Vermont Expos, the former minor league farm team for the Washington Nationals, changed their name to the Vermont Lake Monsters and adopted a Champ themed mascot. (oursportscentral.com, 2005) 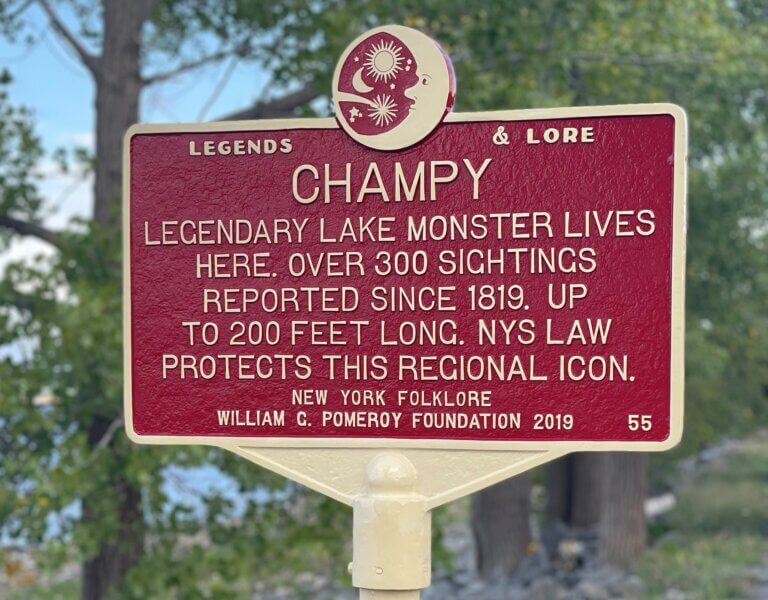