Only a few miles from the Canadian border lies the small town of Champlain, New York. Local residents Noadiah and Caroline Moore were ardent abolitionists, dedicated to bringing an end to slavery. The Moores used their home to shelter people escaping slavery and to help them reach freedom in Canada.

The state of New York was an integral part of the Underground Railroad, and was not only a destination for fugitive slaves but one of the final stops in America before reaching freedom in Canada. North Country Underground Railroad Historical Association’s website notes that between 1830 and 1860 thousands of formerly enslaved people crossed over into Canada, with most of them having begun their journey through the state in New York City. From the city, there were multiple routes that could be traveled, but the most popular one took the fugitives to Albany, where they could either follow the Erie Canal west or take the Hudson River north. If those running traveled the Hudson, the next stops took them along the Champlain Canal and into Lake Champlain before they were eventually moved across the border.

A branch of what has become known as the Champlain Line led some of the runaways to Clinton County, where abolitionists such as Stephen Keese Smith and Noadiah and Caroline Moore would take them in and provide shelter. Smith recalled later in 1887 that when the fugitives arrived at his house, they “would come through the woods and be nearly famished.” The recollection—housed in the Special Collections of the Benjamin F. Feinberg Library—also stated that after he had housed and fed the fugitives for one to two days, they would be taken farther north to their last stop at the Moore house. Describing Noadiah as a philanthropist, Smith told of how the Moore property was about seven miles from the border and that Noadiah would accompany the newly free people into Canada to help them find work.

Noadiah began speaking out against the slave trade as early as 1839 in Creation on the Depravity of the Time by chastising the “proud christian Slave holder” for living in the luxury “whipped from the back of the unresisting African.” Believing that there would eventually be a day of judgement, Noadiah warned slaveholders that God takes notice of the enslaved people’s pain and attributes it to the cruel owners. There would then come a day where “the poor and despised negro [will] arise, and be greeted by the smiles of a beneficent Creator,” while the slaveholders “shall be humbled to the dust under the awful frown of his displeasure.” Along with various writings, Noadiah was also active in many of the anti-slavery societies and conventions throughout the state, and the Emancipator published on May 12, 1842 that he had been elected vice-president for the local Anti-Slavery Society in Clinton County.

Wife of Noadiah, Caroline Moore was just as active among the abolitionist groups in the state and actually formed her own missionary society based out of her home. Described in Women of Wealth and Privilege in 19th Century Champlain: The Moore and Nye Family Women by Melissa McManus, one of the society’s largest contributions was a donation sent to Lewis Tappan, who was an abolitionist in New York City and able to forward the money along to the Mendi Mission in Sierra Leone, Africa. Established after the widely publicized mutiny of enslaved Africans aboard the Amistad, the Mission was founded to help support the newly freed Mendi people adjust to life back in Africa. Besides donations, Caroline’s society was known to meet and read prayers and anti-slavery publications while sewing.

The North Country Underground Railroad Historical Association estimates that throughout the duration of the Underground Railroad, 100,000 enslaved people made their way to freedom. Of those 100,000, around 40,000 chose to cross the border into Canada with the help of abolitionists like Noadiah and Caroline Moore. 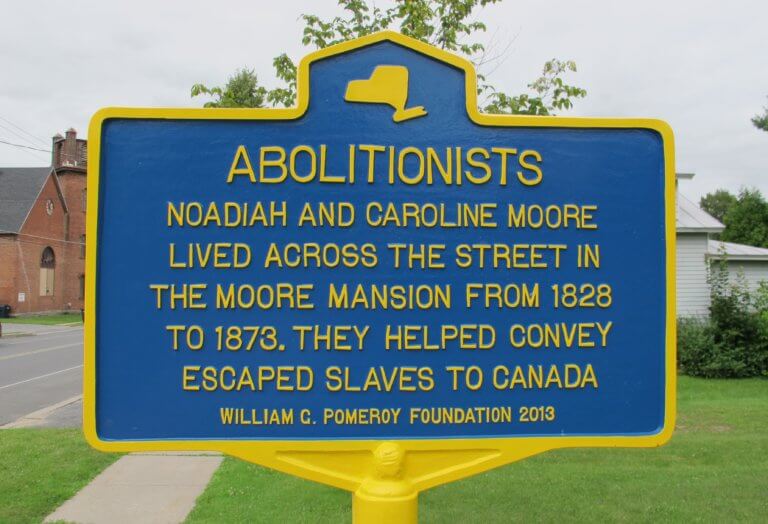