The Anti-Rent State Convention, held at this church, marked years of struggle by the tenant farmers bound by the outdated patroon land system, never owning land outright. Those elected at the convention helped end this unjust system.

The Anti-Rent Wars were a response from farmers to the leases they had signed with the land owners. According to the New York State Library’s Van Rensselaer Manor Papers, the issue began with the creation of a “durable lease” by Stephen Van Rensselaer and Alexander Hamilton. This type of lease was meant to bind the tenants and their heirs to the manor forever, and by calling it an “incomplete sale,” Hamilton was able to by-pass the fact that this idea of feudalism had been made illegal in the state of New York in 1787. Along with requiring the tenants to pay their annual rent, they were also required to pay taxes on the land even though the tenants were only allowed to use it for agricultural purposes. The land owner, or patroon, had access to everything else on the land, including timber, mineral, and water rights. Also listed in the lease was the caveat that if the tenant wished to sell the land, they would be required to pay a quarter of the sale price directly to the patroon. Under leases such as this, “the patroon kept all the advantages of land ownership, and the tenant had all of the obligations of land improvement, road building, and taxes.”

Issues with the leases came to a head after the death of Stephen Van Rensselaer III in 1839. While alive, Van Rensselaer III had been lax in his pursuit of overdue payments, and this behavior even earned him the nickname “Good Patroon.” After his death, however, Van Rensselaer III wrote in his will that he wanted all the overdue rents to be collected immediately, and the two sons that inherited the land, Stephen Van Rensselaer IV and William Paterson Van Rensselaer, did just that. The two were said to be aggressive in their approach to the tenants, with many of the farmers noting that they “refused to renegotiate leases or sell lands.” As the two sons worked to either collect the debts or evict non-compliant tenants, tensions escalated to the point of violence and eventually the Anti-Rent Wars.

Negotiations between the farmers and patroons led to the Anti-Rent State Convention, held at St. Paul’s Lutheran Church in Berne on January 15, 1845. Later known as Helderberg Evangelical Luther Church, their website states the current building was constructed in 1835 and has undergone several renovations since then. An article about from the Albany Argus on February 11, 1845 titled “Anti-Rent State Convention” says that the church was a “large and commodious edifice.”

According to the Albany Argus, there were delegates from eleven different counties present. In hopes of gaining support for their cause against patroons, organizers asked the citizens to “lay prejudice aside” and form an opinion based solely on the facts. The delegation then continues on to say that they are Americans and, as a result, were entitled to the laws that are meant to be fair for all, but that equal justice “is denied [them] by the existing laws of this state…particularly to those relating to landlord and tenant.”

Change was brought about as voters called for a New York State constitutional convention in 1846. The New York State Archives notes on their site that with a voter approval margin of 2.5 to 1, the new constitution “abolished all remnants of feudal land ownership,” along with extending constitutional protection for local governments and a reorganization of the judiciary. 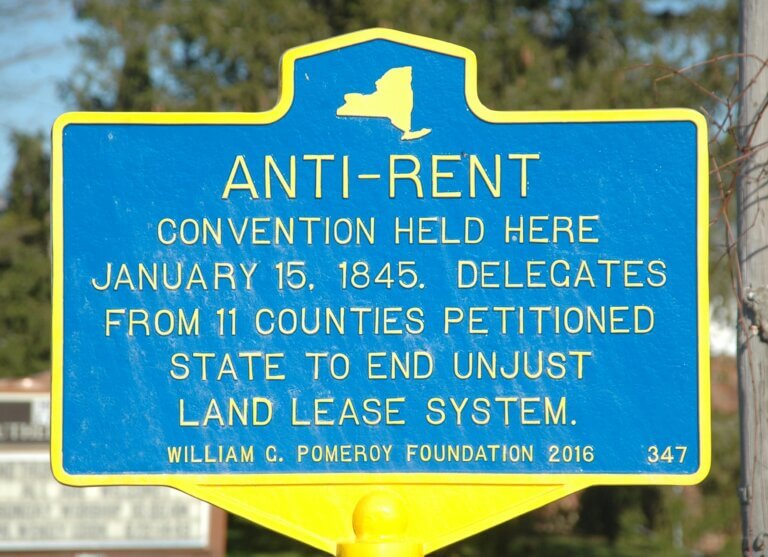