In 1797, Revolutionary War veteran Asa Rice and his family arrived near this site, now called Rice Creek, in what is modern Town of Oswego. Following the end of the American Revolution, the U.S. Government was just beginning to take shape and could not afford to provide veterans with a pension for their service. However, the developing government did have a surplus of land, therefore many soldiers received a Land Bounty for their service.

Asa Rice was born on September 1, 1754 in Cheshire, Connecticut (Findagrave.com, 2019). On March 7, 1778, he enlisted as a private in Captain Wilcox’s Company out of Connecticut. During the Revolution he served for three years where he fought in the Battle of Saratoga and was instrumental in preventing the British from travelling up the Hudson River (Oswego Commercial Times, 19 Mar 1859). After his service, he returned to Connecticut and married Elizabeth Merriman on April 11, 1784 (“Asa Rice, Connecticut, Church Record Abstracts,” National Archives, 1784). In 1788, Asa was granted his bounty land, which amounted to 100 acres in Central New York (Bounty Land Certificate Asa Rice, 9 July 1790, National Archives).  In 1797, Asa, his wife and their eight children began the arduous trek from Connecticut to New York.

The Rice family arrived to a plot of land in October 1797, but due to their travelling conditions they lacked food, resources and shelter. They waited six weeks for their winter provisions to arrive. Asa “found many hardships and privations to endure, it being late in the fall; and winter setting in earlier than he expected they found themselves short of provisions, and an infant child of theirs actually starved to death” (History of Oswego County, New York, Crisfield Johnson, 1877). Once their provisions arrived a log house was built for Asa’s family. Upon its completion they celebrated by naming the area “Union Village” (Oswego Commercial Times, 1859).

The land Asa and his family called “Union Village” was actually a part of the Township of Hannibal (current day Oswego). Asa was one of the earliest homesteaders in town and served as supervisor for several years (“Townships in the Military Tract,” National Archives, 1800 and History of Oswego County, New York). In 1798, the three townships, Lysander, Cicero and Hannibal all united under one town supervisor, Asa. He served as supervisor until 1806 (History of Oswego County, New York).  After becoming supervisor he reported, “the number of inhabitants in this territory as fifteen and its taxable property was valued at $1,500” (Landmarks of Oswego County, John Charles Churchill, 1895). Asa registered his war bounty in February 1800 (“US War Bounty Registration 1800,” National Archives). According to the 1810 U.S. Federal Census, Asa and his family of seven were settled in Hannibal, Onondaga, N.Y. In August of 1819, his wife passed away and a few years later in 1823 he joined her. Both are buried in Rice Cemetery (Findagrave.com, 2019). 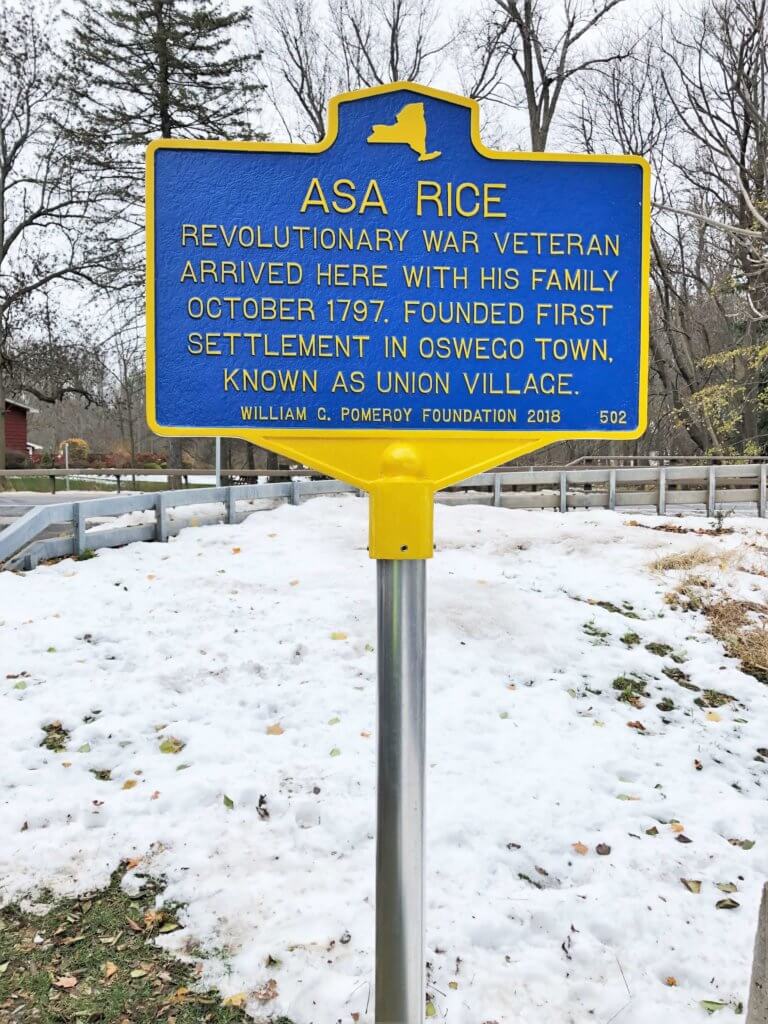