The Auburn Aviation Company’s airport was an integral part of Auburn for over a decade. It served as part of the Civil Air Patrol during World War II, a mercy flight center, and offered pilot training along with passenger flights.

On May 8, 1941, the local Auburn newspaper, The Press, announced that Leman Ingalls of Fleming, Ralph Bower of Scipio, Hugh Darrow of Moravia, and Frank Nugent leased a piece of property for an airport. Together they planned to have the airport up and running by June of that year.  At the time, Bower was working on obtaining his instructor’s license in order to run a pilot training school. A few weeks later, the May 26, 1941 edition of The Press reported that “the government has approved the spot for a flying field, and the city of Auburn has lent machinery.” The four men, now nicknamed the “Flying Farmers,” planned to have a hangar large enough to fit 15 planes. Auburn Airport was officially opened in late July of 1941 (Democrat and Chronicle, 29 Jul 1941). According to the 1945 AAF Airfield Directory, the airport was comprised of 128 acres with 3 sod runways and a single wood & metal hangar.

This airport served the community in a variety of ways. By December 1941, the airport was utilized by the Civil Air Patrol, “a group of civilian aviation enthusiasts banded together as a volunteer patrol unit in civilian defense without pay but under government instructors” (Democrat and Chronicle, 22 Dec 1941). The long winters in Central New York resulted in some unique innovations for services provided to local residents. The Post-Standard from February 8, 1945 states that the airport offered a ski-equipped plane “for use in emergencies in Cayuga county” during the winter months. Additionally, three locals volunteered to deliver mail to residents who were snowed in, The Post-Standard called this the “Good Neighbor Act.” The Auburn Airport acted as a mercy flight center. One example cited in an October 22, 1947 The Citizen-Advertiser reports an incident where a pilot flew to North Bay, Canada to bring a critical patient back to Auburn so to be treated closer to his hometown.

In September of 1952, after 11 years of business, the owners of Auburn Airport closed its doors and decided to sell its property. No mention was publicly made about the reason for the closure, other than its owners wanted to retire. When interviewed by The Citizen-Advertiser in September 15, 1952, Ingalls, an original “Flying Farmer”, highlights the airport’s achievements. When first opened, there were only six licensed pilots in the county. Since then, a total of 105 veterans attended the school and were taught how to fly. He further states that, “60 planes in one day have used the airport, the average is about 900 a year.” After closing, the airport was auctioned off. On March 17, 1953, The Citizen-Advertiser announced that Lewis Roberts Corp purchased the airport property for $27,500 and planned to build a facility to develop a paint for manufacturing printers’ ink. 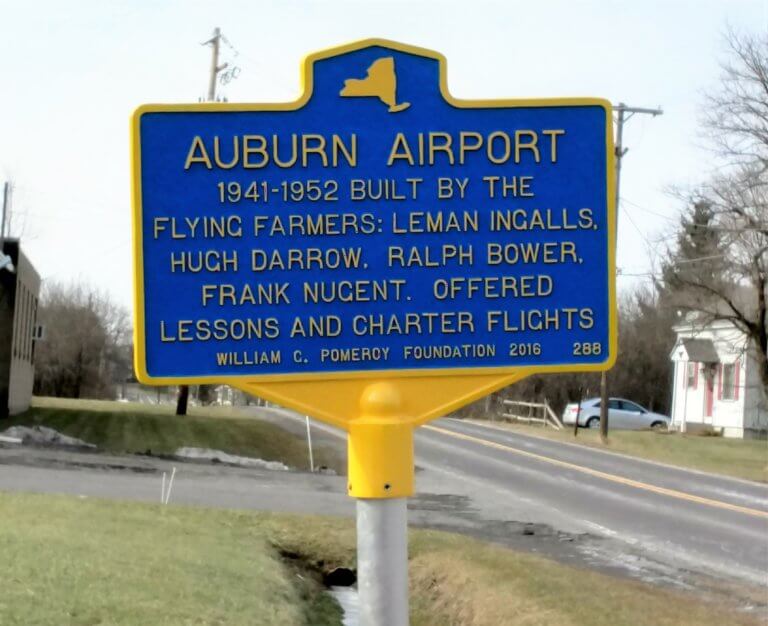