In the late 1800s, Italian inventor and electrical engineer Guglielmo Marconi discovered the ability to transmit electric signals wirelessly through radio waves over the span of hundreds of miles. This groundbreaking discovery revolutionized communication. From 1902 until 1907, operators at the Marconi Wireless Telegraph Station and School both used and were trained in this technology.

Arguably one of the most effective uses of wireless telegraphy at the time was to communicate with ships at sea. In 1902 a local residence known as ”Jacobs Cottage”, in the Town of Babylon, was leased to the Marconi Wireless Telegraph Company. This station was one of several established on Long Island. A large wooden pole was installed to serve as the transmitter tower and a small shed-sized structure known as “the shack” was constructed to serve as the transmission station.  While in operation the station often communicated with ships at sea. In May of 1905 the Marconi Station in Babylon was one of the only stations that received a message from the RMS Caronia stating it had run aground on a sandbar.

In 1907 the Marconi Station and School closed. In the years that followed the transmitter tower was dismantled, Jacobs Cottage was moved and the old shack fell into disrepair. In 1930 the radio shack was saved when it was moved to Rocky Point, Long Island. As of 2020 it continued to stand, fully restored and preserved. 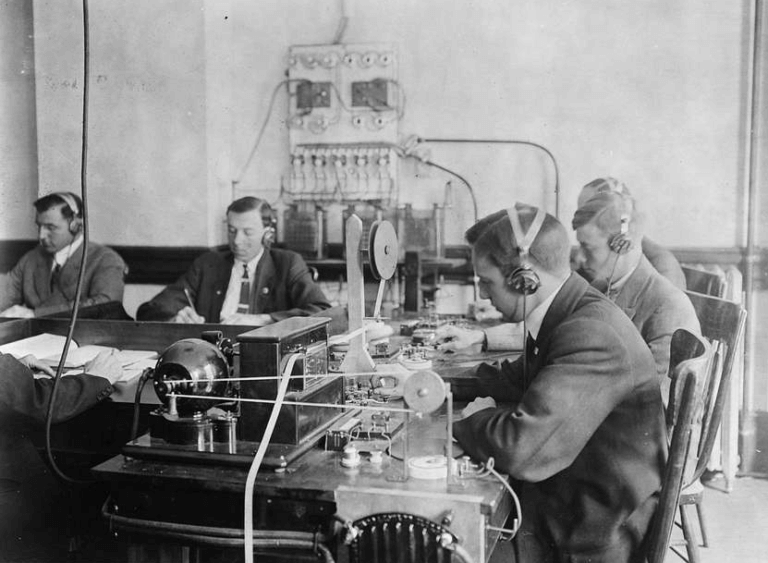 Students practicing at a Marconi wireless school in New York, circa 1912