The Baker Fireman’s Fountain is located in the Village of Owego’s courthouse square. The fountain was given to the Village of Owego and its firefighters in 1914 by Frank M. Baker as a memorial to his son, George Hobart Baker, who was killed in an automobile accident in 1913.

George Hobart Barker was born in the town of Owego on August 28, 1871. (Headstone, Evergreen Cemetery) He was the son of Frank M. Baker, who was a former New York State Railroad Commissioner. Later, at the time of George’s death, Frank and his son ran hardware firm in Owego called F.M. Baker & Son. (Star-Gazette, 1913) George was a former chief of the Owego Fire Department and led the first division during the department’s 48th annual parade. (Star-Gazette, 1901) Both George and his father were prominent in the business and fraternal circles of the area, with Frank known across the state owing to his former position as a railroad commissioner. (Star-Gazette, 1913)

It came as a shock to the local community when, on the morning of December 17, 1913, George’s burnt remains were found underneath his overturned car. George had been visiting Binghamton the previous night on business errands and later in the evening visited his sister. Around midnight he left, driving his Chalmers Runabout back home towards Owego. No one witnessed the grisly accident, which was surmised to have occurred around 3am. The wrecked remains of his car were found near Apalachin, several miles from Owego. It could not be determined whether driver error, mechanical failure, or some other cause triggered the accident. All that could be ascertained was that George’s car ran off the road about 200 feet into the ditch before overturning. George was pinned under the wreck, which soon caught fire. By the time someone discovered the remains of the car, it had already burned down to embers. It was quickly realized that someone had been trapped underneath. Once the wreckage had cooled enough, an inspection revealed only charred bones, George’s keys, and a gold ring still wrapped around a finger bone. These last two items were the only means which identified the remains as George Baker’s. The bones and ashes were collected and brought to an undertaker. George Baker was survived by his wife as well as his son, Frank, and daughter, Marian. (Star-Gazette, 1913)

The following spring, on May 22, 1914, Frank M. Baker’s intention to gift a memorial fountain in honor of his son to the village of Owego was announced. It was to cost around $1000 and have a life size metal figure of a firefighter. (Star-Gazette, May, 1914) The ornate fountain was unveiled on August 26 that same year, at the 61st annual parade of the Owego Fire Department. It was formally presented to the village by Frank and dedicated to both his late son and Owego’s firefighters. (Star-Gazette, August, 1914) Restoration of the fountain commenced in 2018 by the Owego Hose Team. 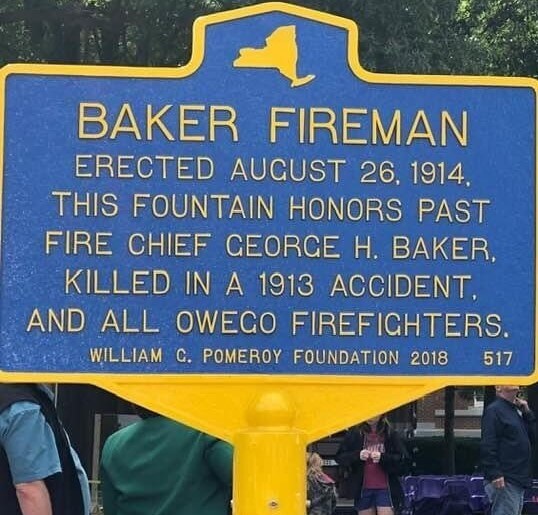 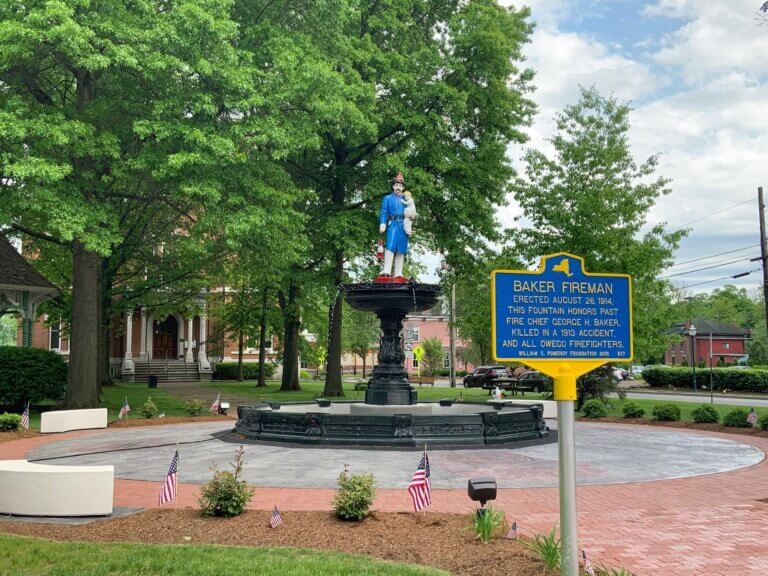