Along South Main Street, in the center of the Village of Homer stands a large, three and a half story, brick building once known as Barber Block. This block was originally home to Jedediah Barber’s Great Western Store which was an emporium notorious for having everything imaginable.

An article from the July 1936 vol. 17 of New York History journal entitled, “Jedediah Barber 1787-1876, Merchant of Homer,” explains that Jedediah Barber arrived in Homer with his family around 1811. He purchased land that “extended from the center of the river to the main street.” Over the next few years, he built a 22 x 30′ building on this land that would soon be considered the center of Homer. Barber opened a large store known as The Great Western Store, since this part of Central New York was considered the western frontier at that time. Open for business around 1813, it helped to develop Homer into a “commercial center and source of supply for people from miles around” (Old Homer Historic District, National Register of Historic Places form, 1973).

During the 1820s, the store was expanded and built up three stories tall. An 1828 Cortland Observer advertisement for the store announces  “J. Barber has an assortment of staple and fancy dry goods ‘equal to any in the western country” and further enumerates “leghorn hats, flats and crowns, paper hangings, shirtings and sheetings, stoves, kettles, nails, glasses, sash, sole and upper leather, calf skins and 100 barrels first quality whiskey.” Barber’s store did a significant amount of business leading Barber to become one of the largest landowners in Homer. The “Jedediah Barber 1787-1876, Merchant of Homer” article declares that during the height of his success in the 1840s, Barber generated around $150,000 a year through his store and other business ventures. That is worth approximately $5 million in 2019 dollars!

Unfortunately disaster struck in 1856 when the store burned down. The cause of the fire was unknown. Barber decided to rebuild on this property in 1863. He built “a three and a half story brick block with slate mansard roof,” and, “symmetrical rows of rounded arch windows with pediments” (Old Homer Historic District, National Register of Historic Places form). This new building was called Barber Block. It featured Barber Hall, a theater which could seat 1,000 people. Additionally Barber Block included several shops, a bar and a billiard hall (The Post-Standard, 3 Jul 2011).

Toward the end of his life, Barber was plagued with money troubles which forced him to sell off the majority of his assets. By 1876, Barber Block had new owners who converted the building into the Keator Opera House (The Post-Standard). The opera house featured recitals, plays, operas, lectures, conventions and exhibits. It remained operational until 1908 (Bev & Co. website).

In 1973, the Barber Block building was added to the National Register of Historic Places as part of Old Homer Historic District designation. As of 2019, Barber Block served as a mixed-use building with a storefront lining its ground floor. 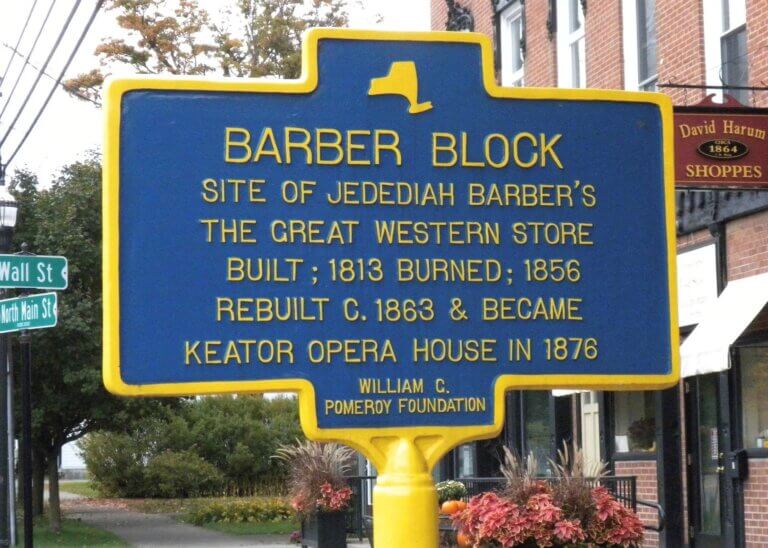 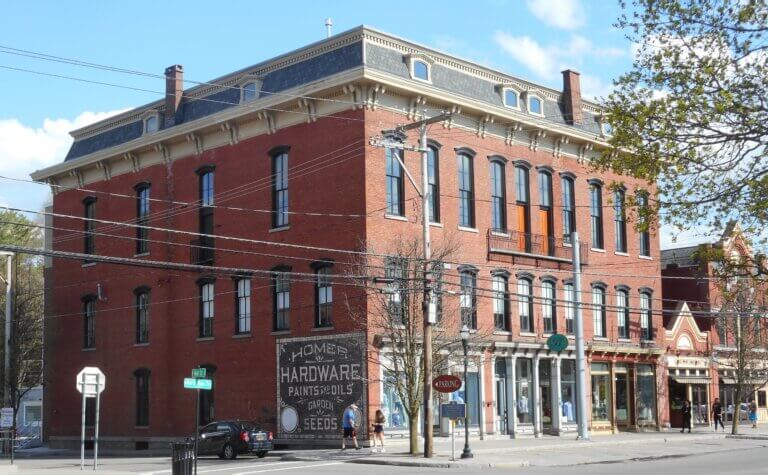