Bennington Park was a planned community in the Village of Freeport. In 1902, W. Newton Bennington and Charles S. Powell began to sell lots for individual homes here. The properties were marketed as prime locations for suburban homes for members of New York City’s upper-middle class. They were situated between the Long Island Railroad and Merrick Road, making them easy to travel to by train. By 1910, many African Americans who had moved from the South in search of better work opportunities settled in Bennington Park. Southern-born African Americans lived alongside white immigrants of Italian, Irish, and Eastern-European ancestry. Bennington Park was redeveloped in the 1950s. Many of the homes were demolished and the area rezoned for commercial use.

Bennington Park appears on the E. Belcher-Hyde Nassau County 1906 Long Island, New York Map of Freeport (Part). It is bordered by Bennington and Alexander Aves. to the north and south; and Liberty Ave. to the east. The Encyclopedia also noted that Bennington Ave. was named after W. Newton Bennington, a real estate developer of Bennington Park.

Allison Manfra McGovern’s “History of Bennington Park” (2011) observes that while Bennington Realty Company was marketing the properties as vacation homes, a different settlement pattern emerged: “By 1910, a wave of migrants arrived in Freeport and settled in Bennington Park. Many African Americans moved from the South to Freeport in search of better opportunities for work. Southern-born African Americans lived alongside white immigrants of Italian, Irish, and eastern-European ancestry in Bennington Park… Most African Americans worked for the wealthy white elite as laborers on their grounds, as chauffeurs, and as housekeepers, but some men also worked in the coal yard, lumber yard, and in skilled trades.”

By 1950, according to McGovern, “Bennington Park was crowded and deteriorated.” While some African Americans owned their homes, most rented from landlords who made few improvements to the buildings. The poor living conditions were identified by the New York State Housing Commission and Freeport residents, who sought to redevelop the location. Ultimately most of the homes were demolished and the location was rezoned for commercial use. The residents of Bennington Park were forced to find homes elsewhere, and some African Americans moved to other sections of Freeport, including the units of low-income housing that were part of the redevelopment plan.

In 2011, McGovern noted that Bennington Park was comprised of warehouses and stores north and south of Sunrise Highway. 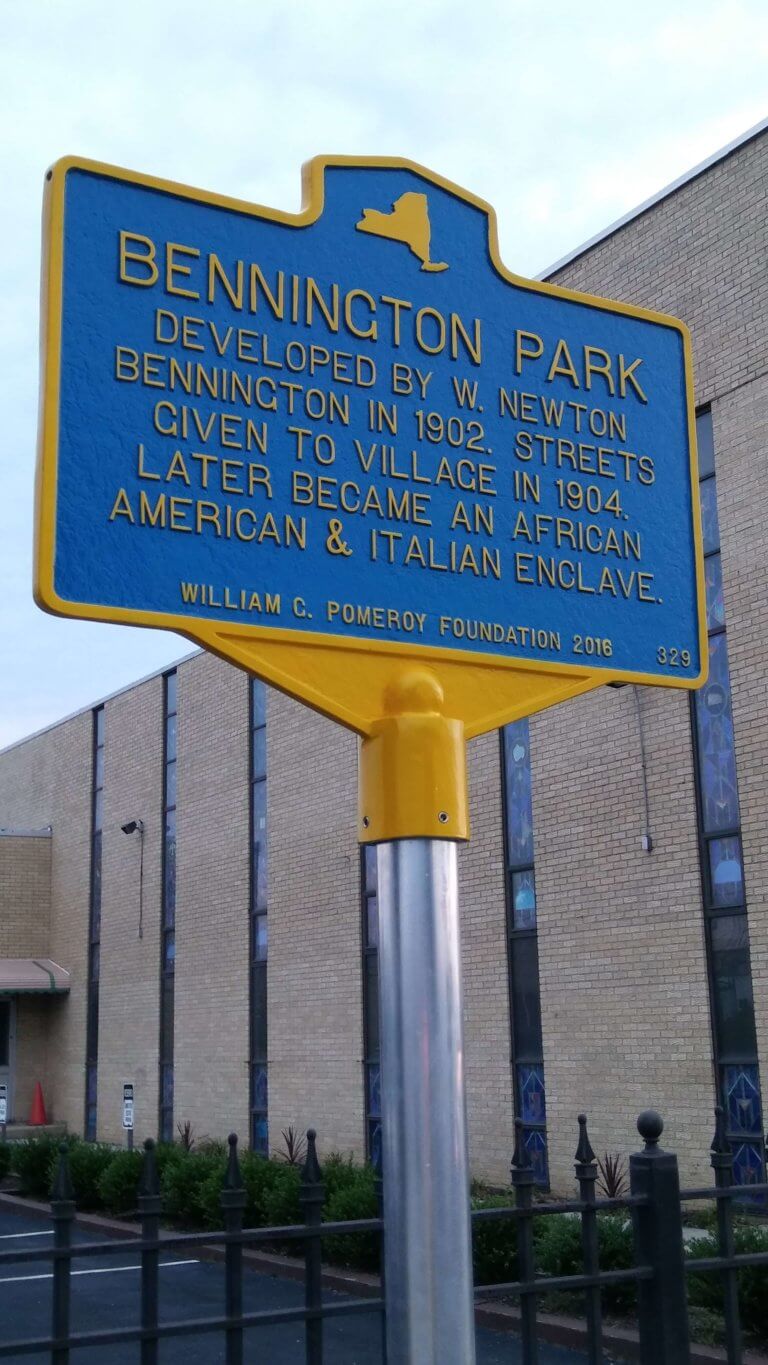