The Blount Lumber Company was established in 1894 by George R. Blount and his brother Andy. They used locally harvested timber to produce everything from furniture parts to mill work. For many years, the company specialized in manufacturing hardwood flooring. The company closed in 1992.

During the 1890s, George R. Blount, a graduate of Rochester Business Institute, and his wife, moved to Sandy Creek, New York. Originally he came to the town to sell fruit trees but in 1894 plans changed and he established Blount Lumber (Sandy Creek News, 3 Mar 1932). It began as a modest-sized plant where he manufactured rocking chairs. As sales increased, Blount acquired two sawmills east of Lacona, NY from 1894-1897 (Salmon River News, 12 Jun 1974). According to local historian, Charlene Cole, “lumber was drawn to Lacona by horse and sled to be regraded and shipped to buyers” (“Marking the Impact,” Newz Junky website, 2018). By 1903, the capital stock was valued at $35,000 which then led to the company becoming incorporated in 1908.

Charles Kirsch was hired to help build the dry kilns and flooring plant in late 1908. This plant manufactured Maple, Beech and Birch flooring (Salmon River News). In 1910, the company began operating a few other sawmills in the area along with purchased land for lumber. They owned around 30,000 acres by 1920. This growth in business resulted in the value of capital stock rising to $150,000 (Sandy Creek News).

After World War I, Blount’s sons, Howard and Floyd, and his son-in-law, Wally Parker joined the company. Together they formed a subsidiary company named Blount-Parker Corporation with the sole “purpose of manufacturing Baby bathinettes.” Blount-Parker Corporation was the first company in the country to produce this product, keeping them afloat through the Great Depression. They discontinued making bathinettes in 1966, however over four million were produced before their closure (Salmon River News).

In March of 1932, family patriarch George R. Blount passed away. According to his obituary in the local Sandy Creek News newspaper, he was a huge advocate of the reforestation program. In the years preceding his death Bount’s company replanted over three million trees.

In 1939, millwork business was added, with new buildings and renovations in 1958. By 1961, the company closed its saw mill and flooring plants. During the 1970s, the Blount Lumber Company was “a wholesale millwork distributor of various building materials, such as windows, doors, mouldings, stair materials, kitchen cabinets and other allied products which go into the home building industry” (Salmon River News). The Blount Lumber Company remained operational until its closing in 1992. It was successfully run by four generations of the Blount family. 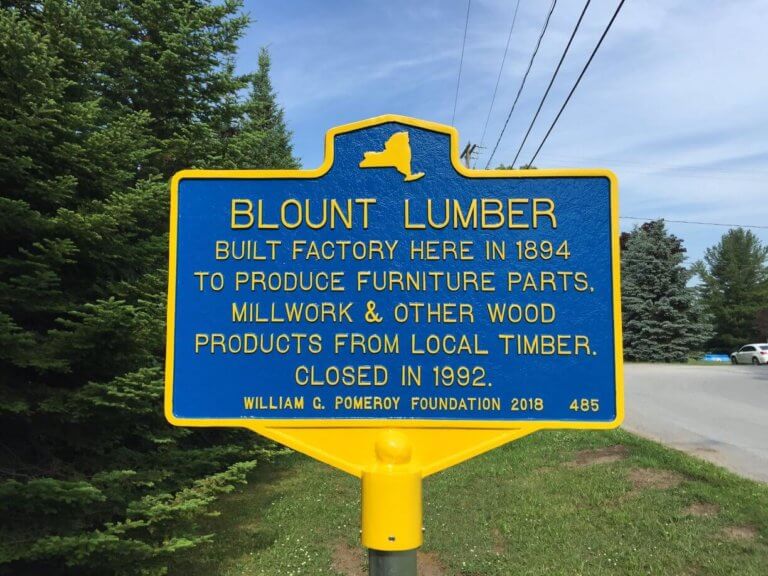