The Bovina Public Library first received their charter in 1917, but the Bovina (NY) History blog run by Bovina Town Historian Raymond LaFever, states that there had been a library in the town “in one form or another since at least 1836.” This first recorded library was known as the Bovina Subscription Library, but it is not clear how long it lasted. The first public library opened a little later in 1879 by the Bovina United Presbyterian Church and was housed in the church basement. The library stayed afloat by receiving both monetary and book donations from prominent men of the time, such as Elbridge Thomas Gerry and Henry Clay Frick. When a state library inspector visited in 1905, he was reported to have said that it was “one of the best selected libraries of its size in the State.”

In early 1917, a man by the name of J.W. Coulter passed away, and in his will, left one of his buildings and $2,700 to be used for the formation of a new public library. This led to the formation of the Bovina Library Association, and by December of that year, the Bovina Public Library was charted by the New York State Board of Regents. The library stayed in that building provided by Coulter for 50 years until moving into the former District Four Schoolhouse. The idea to move the library to the old schoolhouse was first brought up in the Bovina Library board minutes on September 26, 1968, where it was discussed that the current library space was too small for all the books they had acquired. Minutes from the next board meeting on October 10, 1968 showed that the idea had been presented to the town board members, who were “very much interested in having the library use [the school].” The age of the building prevented to library from moving in right away, and time was spent renovating the space for public use again.

The building first opened in 1893 as a school, and an article from the Stamford Recorder discussed its early days in an issue from December 16, 1893. The brief piece on the schoolhouse called the building “modern” for that time, as well as stating that the town had been in need of “a suitable school building” for some time. Before the school’s opening, students from the area had to attend class in the surrounding towns, including Andes, Delhi, Franklin, and Walton. These students were said to bring “distinction and prominence” to themselves and the town, and by having a school that was more accessible, the hope was that young students would be able to achieve more.

The building was constructed with two rooms, one for older children and another for the younger students. Older students were taught by a woman by the name of Lulu E. Burns, a native of Delhi, N.Y., and said to be “an interested, painstaking and accomplished instructor.” The younger students were then taught by an Emma Campbell, and even though the article stated she had only been teaching for four semesters, she possessed “a correct appreciation of the important work in hand.” The article proceeded to laud the school as “an advance[d] movement” and “the first ‘model’ rural school house in the county,” and it continued to be a place of education for children in the area until 1961. The Walton Reporter reported the closing on June 2 of that year, stating that there were 15 students enrolled the last year and were taught by Mrs. Ray Jardine, who had been there for nine years.

As of 2019, the marker stood in front of the Bovina Public Library, which took over the building after its time as a schoolhouse. 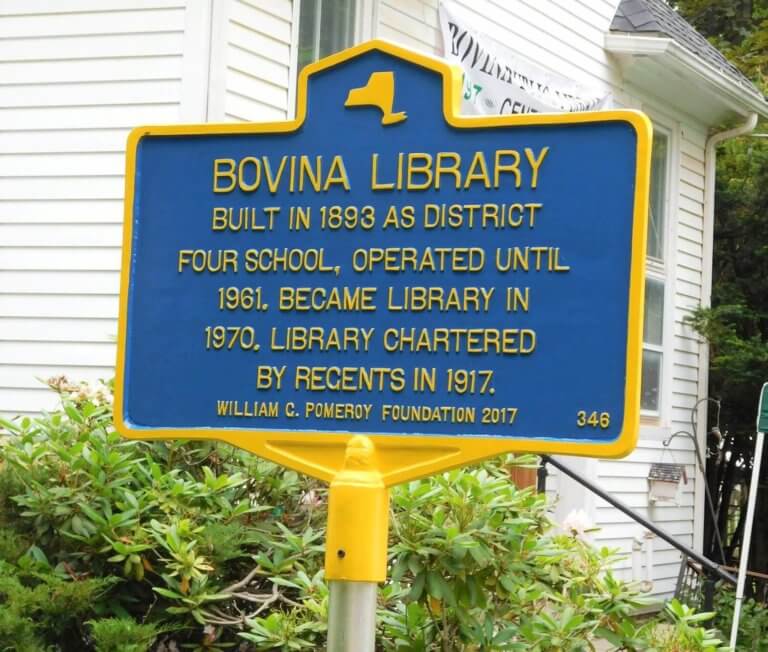 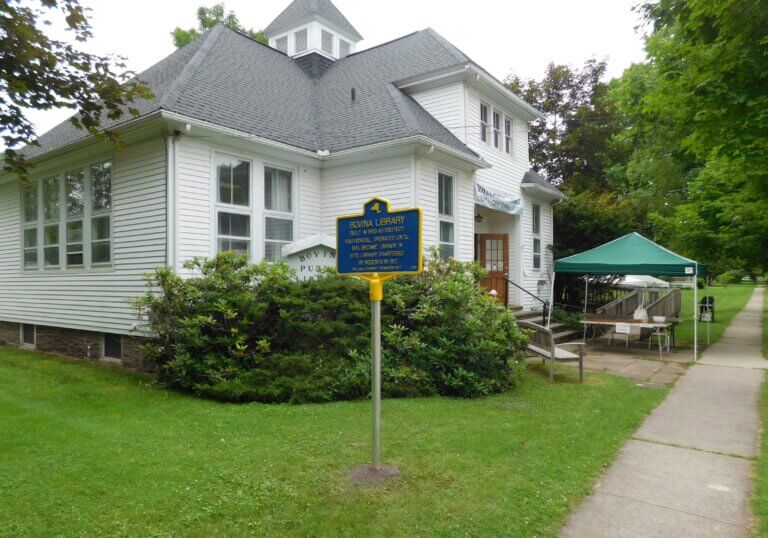 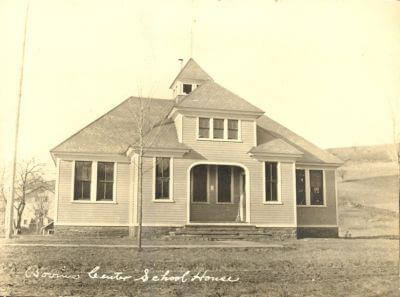