Joining Matamoras, PA, and Port Jervis, NY, the original bridge replaced an earlier rope ferry. The opening of the bridge circa 1855 enabled a greater influx of goods and workers to Port Jervis.

Although iron railroad bridges are commonplace in modern railroad construction, interestingly Catskill Archives, in an article reproduced from Thomas Ehrenreich’s Railroad Extra website, relates a fatal historical accident that occurred. This event created a powerful precedent for their removal along the New York and Erie Railroad line. Apparently, three iron bridges were built as an experiment as early as 1849, the largest being the one across Westcolang Creek and its deep ravine, a short distance east of Mast Hope, Pa., on the Delaware Division. On July 31, 1849, while crossing the Westcolang Bridge, the engineer of a livestock and freight train of seventeen cars reportedly heard a long cracking sound, and felt something giving away. According to Ehrenreich, “[the engineer] put on all the steam possible, and succeeded in getting the engine… upon the other side, but just as he had cleared the bridge it went down with a crash, carrying the tender with it. The cars following tumbled into the abyss, one after another, until fifteen of them, with their contents, were piled up in the gap.” In response, the remaining iron bridges were removed and replaced with wooden bridges in the summer of 1850.

A March 24, 1870 Evening Gazette article reported on the destruction of the “Delaware Bridge at Port Jervis” which was “struck [by a] gust of wind more violent than the rest… loosening it from the abutments and piers and overturning it in the river, where it now lies.” Although it was a busy time of night, “half-past six”, fortunately no one was on the bridge at the time of the impact. The article also provides a brief history of the bridge which had been built 18 years before by the Erie Railway Company, “in fulfillment of one of the provisions of the charter from the State of Pennsylvania, requiring them to build and keep in repair [the] bridge.” Its length was described as about six hundred feet, having been erected at a cost of $50,000, including abutments and pier. Two spans wide, this permitted trains to pass over along with a carriage way which admitted passing of teams on the bridge. “For some reason the Company never saw fit to run their cars to the Pennsylvania side, accordingly the carriage way was only used,” the article also noted.

By July 21, 1870 Evening Gazette recorded The New York and Erie Railroad had sold their rights and franchises to the Lamont Railroad and Mining Company. Lamont in turn sold their franchise to J.L. Bonnell who formed a stock company with a capital stock of $30,000 to rebuild the bridge. Projected to be completed by December of that same year, the new wire suspension bridge of a similar design to its predecessor planned now included a passage way for foot travel on either side. 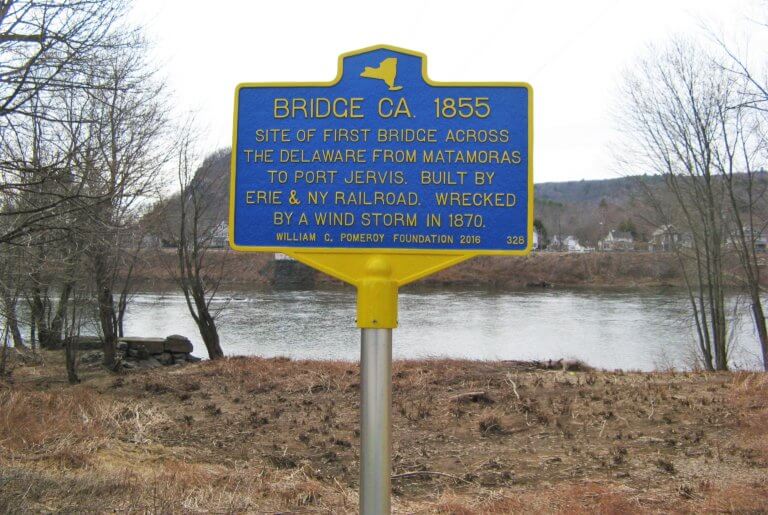