Located near the border of two townships, Taylor and Pitcher, lies an abandoned burial ground. It served as the final resting place for members of the Beebe, Pooler and Brooks families. The cemetery is extremely isolated and without a marker or knowledge of its whereabouts, the burial ground can be easily missed.

This cemetery is believed to be one of the first in the Town of Taylor, with burials taking place between 1810 and 1850. Today few headstones exist but those that do remain belong to four women, two children and one man.

Sally Brooks is the only known member of the Brooks family to be interred here. According to her headstone, she was the wife of Samuel Brooks. She died on June 1, 1824 at the age of 26.

Lastly, from the Beebe family, Abi Beebe, wife of Cokly, passed away on September 19, 1838 at 47 years old. Two children who passed away at ages three and five were listed on her headstone as well.

According to genealogy records from the National Archives, Lovina and Abi were sisters and their maiden name was Leonard. Both women were the children of Amos and Mary Leonard. This evidence coupled with an 1855 map of Taylor revealing a Beebe family plot of land nearby leads to the conclusion that this could have been a family cemetery. Local residents of Taylor recounted that back in the 1940s a farmer sought to use the burial ground for farmland and removed many headstones. Later, according to the town historian, the Pitcher highway supervisor sourced gravel from this site until bones were discovered, which halted further retrieval. 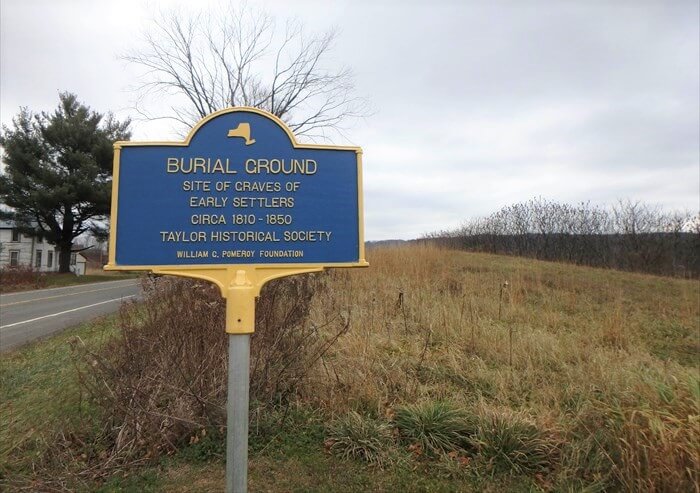