In 1857, Hanna Solomon and Ann Maria Solomon sold this plot of land to David Hempstead, Elymus Derby and Samuel Butler, trustees of the St. David African Methodist Episcopal (AME) Zion Church in Eastville, a section of the Village of Sag Harbor, for the sum of $50. The original indenture or deed for St. David’s AME Zion Cemetery corroborating these historical facts was featured on the Remembering Eastville community web archives. Described by the same source as a site for Long Island residents to learn about local history and archaeology, the cemetery represents the growth of a working class and diasporic community of African American, Native American, and Irish immigrant residents in the nineteenth and early twentieth centuries.

The St. David AME Zion Church was founded in 1840 to serve people of color who were segregated in Sag Harbor’s Presbyterian Church. The new church became an anchor for the growing community; known as Eastville, which consisted of Hampton Street (County Route 114), Hempstead Street, Liberty Street, and Eastville Avenue. A search of contemporary census records shows a large number of free blacks arrived to the neighborhood at the beginning of the 19th century. According to MAAP, Mapping African American Past, a website produced by the Columbia Center for New Media Teaching and Learning (CCNMTL) in partnership with Columbia University’s Teachers College and Creative Curriculum Initiatives (CCI), David Hempstead, Lewis Cuffee, Charles Plato, and William Prime, all outstanding members of Sag Harbor’s black and Indian communities, were among the 16 founding members who organized and helped build the church. Hempstead, in particular, who was respected for his kindness, generosity, and faith, became a leader in the church and is buried in St. David AME Zion Church Cemetery. Eastville Community and Sag Harbor Historical Societies add that the church was believed to have been a station of the Underground Railroad for runaway slaves.

MAAP continues that Eastville, like other early free African American communities on Long Island, was multiethnic. African Americans arrived in Sag Harbor, New York and sought employment in the profitable whaling business sometime prior to 1840. They joined Native Americans, Montauk, and Shinnecock people, who were skilled whalers and lived in the area. A few families of European descent also moved to the community settling along Hempstead Street and Liberty Streets, the earliest roads in the small settlement. While many also attended services at the Presbyterian Church in downtown Sag Harbor, here African Americans and Native Americans were segregated to the balconies and areas to the rear of the church. The population and prosperity of Eastville grew as did the membership of St. David’s Church. During the 1850s, the ethnic mix of Eastville included African Americans, Native Americans, and those of European ancestry.

St. David AME Zion Church was later preserved as an historical site in Sag Harbor by the Eastville Community Historical Society, who was instrumental in restoring the exterior of the building, original tin ceiling, and stained glass windows. MAAP notes that the church continues to serve the descendants of Native Americans and African Americans who founded it and the community on Long Island. The church’s corresponding burial ground, St David AME Zion Cemetery, is also currently under the stewardship of the Historical Society.  A contemporary map in the Remembering Eastville web archives shows the location of the cemetery in the village of Sag Harbor, town of East Hampton, Suffolk County, NY. Very near to the church on Eastville Ave. and Hampton St., when proceeding south the cemetery appears on the western side of Eastville Ave. with Grand St. as the nearest cross street.  The names of the early families who lived in the Eastville Community are seen on the headstones of those interred in this cemetery. The web archives also contains photo documentation of the cemetery’s surviving memorials with biographical descriptions, which was added by the Historical Society in 2013 to share the cemetery’s archaeological and historical research with the public.

In 2016, the Society reported that St. David AME Zion Church Cemetery fence had been completed, a project supported by individuals and the Archeological Institute of America. The Society, operating out of a Sears Roebuck house formerly inhabited by the Johnson family located at 139 Hampton Street, remains the primary repository for the community’s history. 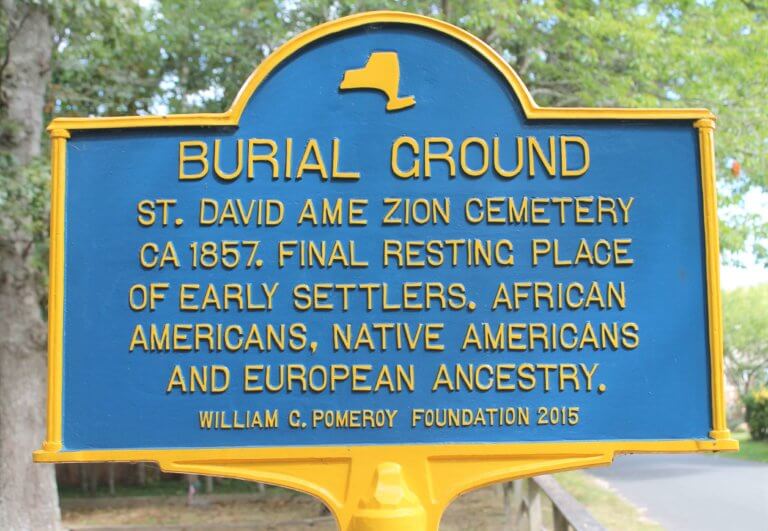 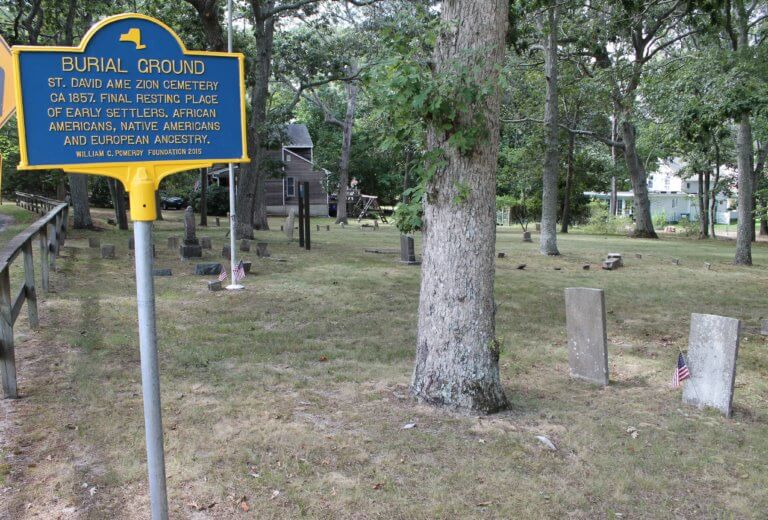