Arguably one of the most important and historically significant industries in the Village of Camillus, New York was the Camillus Cutlery Factory. Camillus Cutlery manufactured knives locally for more than 100 years.

The company produced high quality knives for years. According to a Syracuse Herald Journal article from August 17, 1940, Camillus Cutlery secured a contract for $17,000 to supply knives for the U.S. Navy. They continued production during World War II and were recognized with the Army-Navy Production Award or ‘E’ (Excellence in Production) Award on August 17, 1943. The vice president of the company emphasized to a local newspaper that, “the working force at the plant had been augmented considerably to meet the demands of the armed services for knives and various other sharp-edged implements manufactured there.” Kastor, the President of Camillus Cutlery, at the time, attended the event along with over 1,000 employees and military representatives (Photographs of Army Navy Production Award Ceremony in Camillus, NY, 17 Aug 1943).

Sadly, the prosperity and success of Camillus Cutlery was not meant to last. Some sources attribute the decline to the 9/11 terrorist attacks and the resulting TSA prohibitions, however a widely held belief is that the high cost of production combined with foreign competition of foreign manufacturing caused company profits to plummet. The Camillus Cutlery Company began to feel the pinch around 2005. The company was struggling financially and the workers went on strike for six months. Ultimately, the Camillus Cutlery factory closed on February 28, 2007. The directors claimed that “the closing of its doors [was] due to the general economic conditions of American manufacturing” (The Post-Standard, 12 Mar 2007). Later that year on September 18, Acme United Corporations, a company that distributes household, school and office supplies announced on Business Wire that they attained the Camillus Cutlery Company brand name, patents and trademarks. After the company closed its doors, plans were developed to repurpose the building. During renovations a fire broke out and consumed nearly the entire complex, sparing only the Headquarters building.

As of 2020, the former company offices were converted into commercial spaces and loft apartments. All that remained of the factory was the old logo “Camillus Cutlery Co.” still emblazoned on the corner of the building. 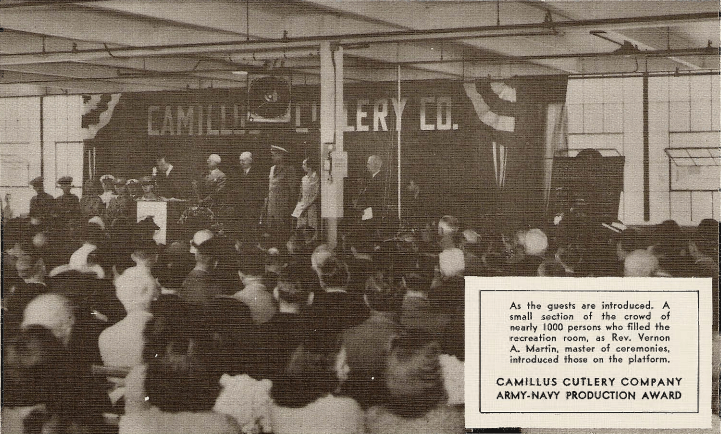