From 1896 to 1941, the Catholic Summer School of America was a nationally known summer destination for Catholic families, distinguished leaders of the Catholic Church of America, prominent lecturers, numerous New York governors and even a few U.S. Presidents. The Summer School was an elegant resort with fine dining, magnificent cottages, recreation facilities, including an 18-hole golf course, a beach, boating and more. The resort also functioned as a nationally recognized facility with educators and lecturers on a wide range of subjects beyond religious topics.

Credit for the idea of the summer school is partially given to Warren E. Mosher from Youngstown, Ohio. As stated in the Plattsburgh Daily Press on July 8, 1935, Mosher was a founder of the Catholic Reading Circle, and it is believed that this helped formulate the “cultural, social atmosphere” necessary to create men and women “who were ambitious to improve their minds.” From there stemmed the idea to create a place where people could gather and educate themselves. The Plattsburgh Republican on July 22, 1893 stated that the first summer school, held in 1892 in New London, was seen as provisional, tentative, and experimental. It was reportedly so successful that the Board of Trustee made it a permanent organization after the first week.

The Catholic Summer School of America was granted an absolute charter and firmly established their objectives for the school, stating that they wanted to provide the leisure of a summer vacation within the confines of an “intellectual centre” meant for those who wanted to improve themselves. All of this was to be done “in the light of Christian truth.” An article from one of the early summer sessions reported on July 14, 1893 by the Plattsburgh Sentinel states that the education they hoped to provide would be “an up-lifting force,” and it would impact the multitude of visitors they state would be coming. Those visitors were said to include ministers, editors, educators, and “those interested in the spread of a broader Christian culture.”

The summer school was moved from New London to land purchased from the Armstrong family, three miles south of Plattsburgh. On that land, the Plattsburgh Daily Republican wrote, facilities were built to provide entertainment for entire families. Published on July 2, 1936, the article recounts that the complex was built with golf courses, swimming areas, baseball fields, and trails for horseback riding, among other things. The families would then live in cottages that had been built throughout the property, with the central gathering area to be the large dining hall. The article also made a point to note that the summer school had been “ideally situated from the point of view of the tourist” and that they would have easy access to Canada, upstate New York, and the Adirondacks.

The Catholic Summer School of America would continue to educate men and women on topics such as literature, arts, and the sciences until 1942, when it was reported that it would not open for the summer. The Plattsburgh Daily Press reported on June 12, 1942, the entry of the United States into World War II, that the summer school was “perhaps another of the many curtailments of war.”

The roadside marker stands on land of the former site of the Catholic Summer School of America. 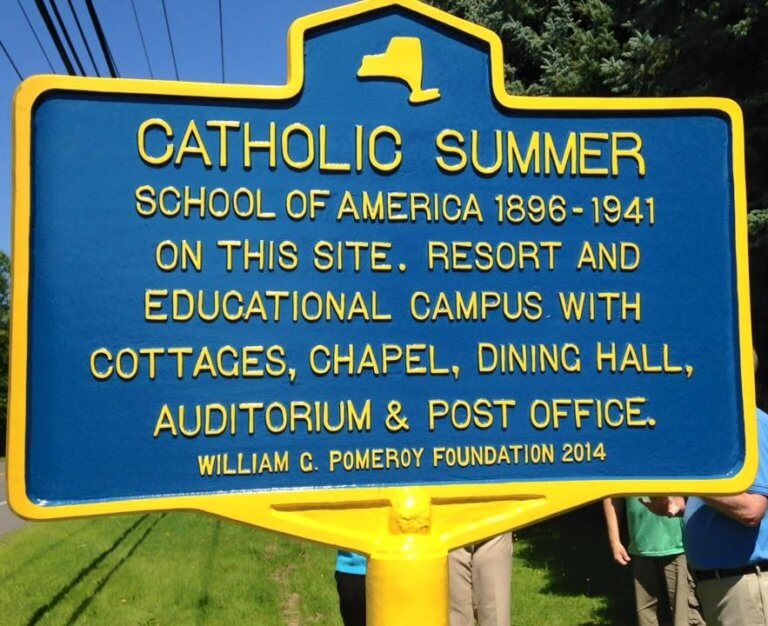