Long Island has an interesting history, and as railroads and various other means of transportation continued to improve, the island became increasingly populated. As number of people grew, towns, villages and hamlets began to be formed. One such community was the German-American City of Breslau. Founded by Abby Welwood, her husband Thomas Welwood and Charles Schleier, Breslau was formally dedicated on June 6, 1870. For several years it was known as Breslau until 1891 when local residents decided to change it to its current name, Lindenhurst.

Arrts-arrchives, a website dedicated to the memory of two men who were students of the Long Island Railroad (LIRR) and who did much to preserve its history, notes the presence of a station called “Wellwood” on the Southside Railroad (SSRR) time table for January 1, 1869. By May 30, 1870, however, the station appeared on the time table as “Breslau”. As the May 25, 1870 edition of the Brooklyn Eagle, reporting on the “[e]xtensive [p]reparation [f]or [t]he [d]edication”, explained:

The projected city of Breslau, located at Welwood Station, on the Southside Railroad, thirty-two miles from Brooklyn, and adjoining the extensive property of Mr. A.T. Stewart… is making rapid progress in construction, and promises to present the appearance of a fair-sized town on the day of its dedication, which, as hitherto stated in the Eagle, has been fixed for Monday, June 6.

The article also published a report of the Breslau Cooperative Building Association’s building committee which recorded sixty houses had initiated construction, with thirty nearly completed. It was estimated that two-hundred men were employed in the city’s development, including four engineers, with several assistants engaged in a “minute survey of the property, and the laying out of streets.” In addition, several hotels and factories started construction, including a hotel called The Hoffman House near the depot. A State Medical College was also proposed to the Association by the Eclectic Medical Society of the State of New York. Harnessing valuable water power from streams running through the property, a brewery, moulding-mill, paper-hanging factory, organ and piano factory, pottery– even a special product of German invention, styled “stone roofing paper”, prized for its fire-proof qualities, was planned. Finally, the same source added that “Churches and school-houses w[ould] also be plentifully provided, and the Association offer[ed] to donate land for the erection of such to all religious societies, without regard to creed, that may make application.”

In a 1909 Brooklyn Daily Eagle interview, SSRR & LIRR Conductor Louis Ringhouse recalled the Village of Lindenhurst was first started as the result of a real estate boom:

The place was then known as Breslau, and the purpose was to encourage the settlement of Germans… I remember very well June 6 1870, when the first public inspection and sale of lots was made. It was a great day, and the festivities reminded one of the Fourth of July. Flags were flying and it was a glad day generally.

According to Ringhouse, there were no passenger cars to transport the crowds of prospective lot buyers who traveled from Long Island City to Breslau on the storied day of the dedication. Instead, he remembered “two trainloads of ten flat cars each and the people squeezed on the cars, riding in the open air, as contented, apparently, as one would be to-day in an open trolley car.”  He added that at the time 8,000 city lots were thought to have been sold by the promoters of the real estate scheme when many of the lots had actually been sold to more than one party. “When the purchasers came to look for their properties,” said Ringhouse “they found other fellows looking for the same lots [!]”

Arrts-arrchives also notes that in 1891 the Breslau station was renamed Lindenhurst. A ca. 1901 photograph from the collection of the Lindenhurst Historical Society shows the restored ca. 1868 depot with the site manager standing on the deck and the “Lindenhurst” sign hanging under the eaves. 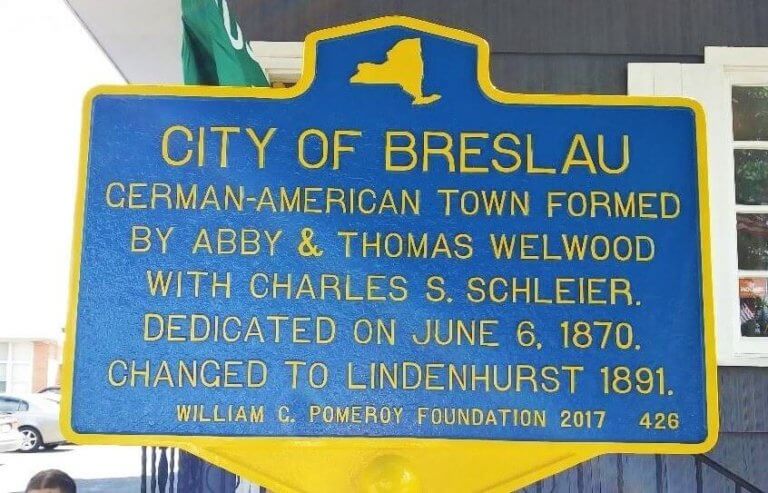