The hamlet of Clark Mills, part of modern-day Town of Kirkland, is named for the Clark Mills Company and its founders: Ralph, Ammi, and Erastus Clark. The family business was established around 1845 and flourished for several years. In 1891 the company name changed to the Hind & Harrison Plush Co. and remained in operation until its closure in 1949.

A 1946 Clinton Courier article notes the centennial anniversary of both mill and hamlet. The article continues on to describe the origin of Clark Mills. The three Clark brothers “inherited the land from their grandfather, who was one of the original purchasers of the district from George Washington.” During the 1840s, the three men, all of whom became “cotton brokers and silk importers on the New York Exchange”, traveled to just north of Kirkland with the intention of building a factory along the Oriskany Creek. The brothers wanted to obtain water rights on the Creek therefore they bought 600 acres from early residents in the area (Clark Mills Marker Unveiling Pamphlet, Clark Mills Historical Society, 1 Oct 2017). Further in the Clinton Courier article it states that “the cornerstone of the first mill was laid in June 1846 and the brickwork completed in the fall.” The building was “four stories high, 275 feet long, 70 feet wide, with a wing at the rear nearly half the size of the main building.” The first mill was named A.B. Clark and Company.

The location of the mill and the hamlet was originally situated on land in four townships: Kirkland, Westmoreland, Whitestown and New Hartford. Interestingly, the brothers received permission from Washington, D.C. to establish a separate post office (Clinton Courier, 1 May 1958). They petitioned the post office to name the settlement “Clark Mills” in 1846 according to the Clark Mills Historical Society. However, a 1858 post office closure notice dated November 16 indicates the post office was closed by November of that year. This resulted from an act that was passed, in fact, three years prior in 1855. The act effectively annexed Clark Mills hamlet into the Town of Kirkland, rather than continue to be spread among four different towns (History of Oneida County, New York, Samuel Durant, 1878).

As stated in “Clark Mills, A Hamlet Deep in History,” from the September 2015 issue of Five Point Compass, by 1866, 300 workers were employed at the mill. The article further details that “the work week was typically 6 days a week and paid 50 cents a day.” In 1873, both Ralph and Eneas Clark had passed away, while Ammi Bailey had retired to New Jersey. Per the Clark Mills Historical Society, the mill property was passed to their cousins who decided to close the factory in the 1880s.

Several years later, in the early 1890s, British businessman Arthur Hind arrived in America looking for a factory to continue his industry. As relayed in the “Clark Mills, A Hamlet Deep in History” article, in 1891 Hind purchased the old Clark Mills factory and established the Hind and Harrison Plush Company. A July 12, 1978 article published in the Clinton Courier emphasizes “the influx of skilled labor” that came from England to work in this factory. As a result of the growing immigrant population, Hind built the Arthur Hind Club House in 1913 to serve as a community center for his employees and their families. That same year, Hind employed an estimated 650 people (“Clark Mills, A Hamlet Deep in History”).

The “Clark Mills, A Hamlet Deep in History” article continues that after the death of Hind in 1933, a man named W. R. Kennish assumed ownership of the business until 1943 when M.L. Grant of Merry Finance Company acquired the factory. On September 1, 1943, members of the Horvath and Erdoss families formed a limited partnership of the Clark Mills property to remain in effect until August 31, 1953 (Clinton Courier). Grant then transferred the factory to these partners. The mill officially closed on April 15, 1949 (Clinton Courier, 20 Apr 1950).

As stated in the Clark Mills Marker Unveiling pamphlet by the Clark Mills Historical Society, in 1972 a large part of the mill was destroyed. As of 2017, the factory site was home to multiple entities, including the Clark Mills Fire Department, a senior citizen center, the Kirkland Police Department and Rofin Industries, maker of heat exchange devices. 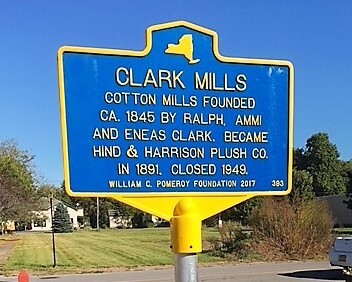 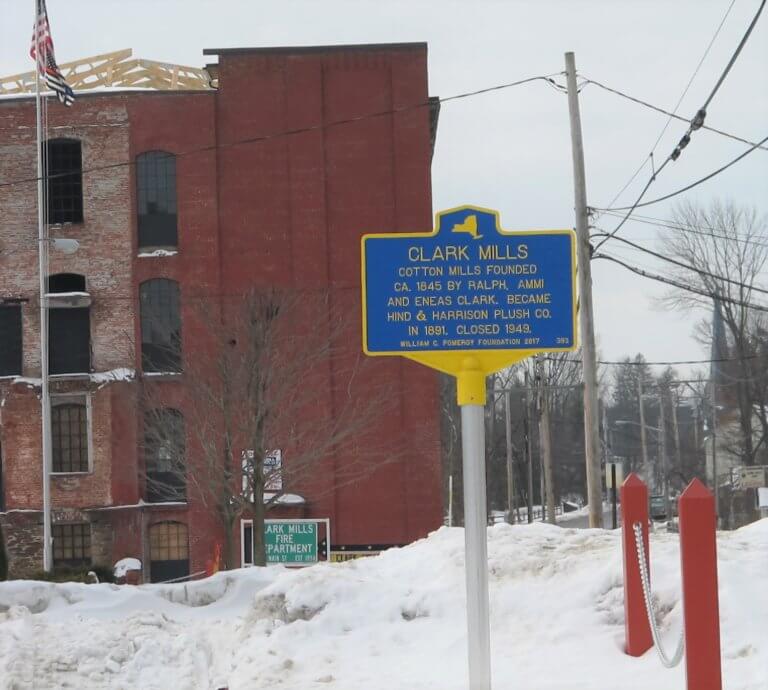