The Clinton Liberal Institute was a co-educational boarding school, including a college preparatory school, business school and military academy. In 1900 the Institute burned to the ground during a fumigation process to eradicate the spread of scarlet fever. The property is now the site of the Fort Plain Junior-Senior High School.

In the early 1830s, trustees of the Universalists of New York State decided to build a school to serve the youth of Clinton. The school was chartered on April 29, 1834 by an act passed by the Government of New York State during their fifty-seventh session, “to incorporate the Clinton liberal institute,” which gave the eighteen trustees legal permission to operate a school, “for the purpose of providing a literary seminary for the public instruction and education of youth.” An article published by The Fort Plain Standard on March 29, 1900 states the Clinton Liberal Institute was a co-educational preparatory school, operational from the 1830s to the 1870s until around 1878 when it was decided to relocate the school from Clinton 45 miles eastward to Fort Plain. The institute, as stated in the of Clinton Liberal Institute photographs from the Fort Plain Free Library moved into, “the former Fort Plain Female Seminary and Collegiate Institute.” The Fort Plain Standard reported that the Clinton Liberal Institute in Fort Plain opened its doors for classes the fall of 1879. It served as a boarding school and could house around 200 students, both men and women, ranging in age from 13 to 24 (Saltsman Collection Clinton Liberal Institute). A United States military academy was later added in 1890.  Notable students of the institute include Grover Cleveland, the 22nd and 24th the President of the United States, Clara Barton, the founder of the American Red Cross and Simon Lake, a mechanical engineer who helped develop the first submarine (The Fort Plain Standard, “Clara Barton 1821-1860”US National Park Services website, Saltsman Collection Clinton Liberal Institute).

The Institute’s luck ran out on March 25, 1900 when disaster struck. Local newspaper The Fort Plain Standard reported that due to a recent outbreak of scarlet fever, the Institute decided to fumigate and disinfect the building while the majority of the school’s students and employees were on Easter vacation. While well-intentioned, this process actually caused a fire. The Buffalo Evening News reported on March 26, 1900 that, “in less than a half hour the entire 5-story building was a mass of flames. About an hour after the alarm had been sounded the huge tower fell with a crash and was quickly followed by the walls and chimneys.” The Fort Plain Standard noted that while two out of twenty pianos were saved, the school library’s collection of over 4,000 volumes would be irreplaceable. A March 26, 1900 New York Times article estimated a loss of $90,000 to $100,000.

One month after the fire the New York Tribune reported on March 3 that the school owners, the Executive Board of the State Universalist’s Convention, would not rebuild and in fact planned to sell the property. The convention also decided to relocate all seminary studies to St. Lawrence University in Canton. 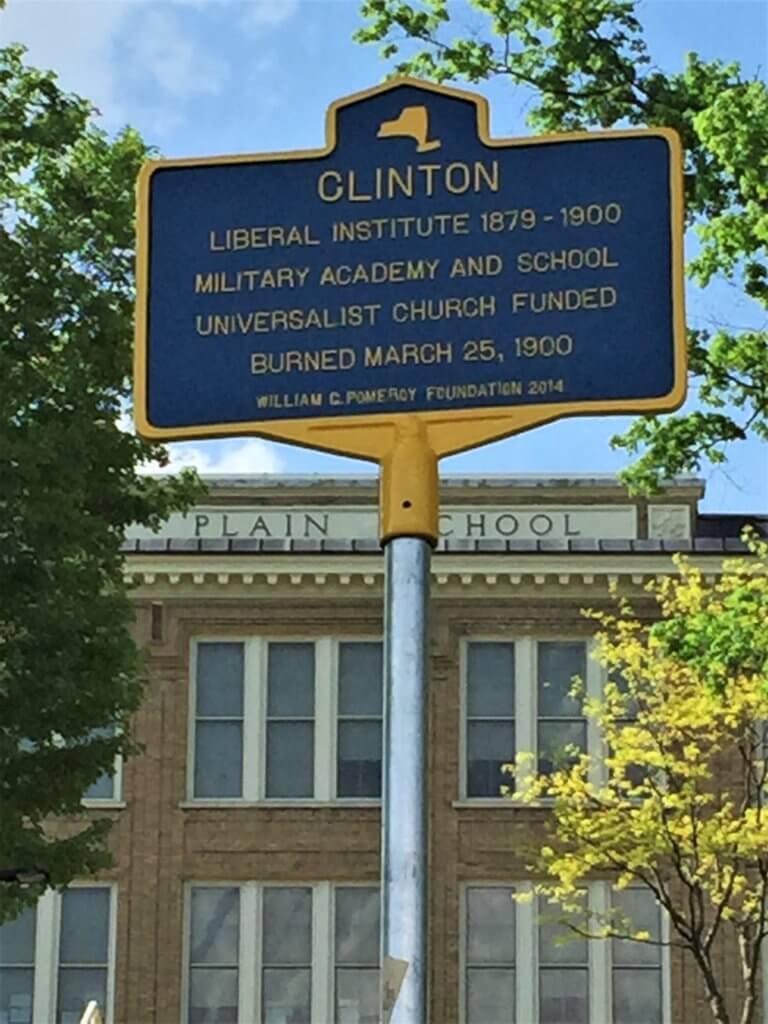