Colonel James Dean was president (what would be called mayor now) of Freeport from 1902-1904 and president of the Freeport Club, a prestigious men’s organization. His collection of weapons was called “the greatest to be found in the country.” Dean’s house, located at 267 South Ocean Avenue, after a series of private ownerships, later became part of Freeport Hospital. In 1999, Freeport Historical Society reported, the Village of Freeport purchased the property and replaced it with cooperative housing around 2002. In 2019, the development was known as the Beechwood Commons.

According to Freeport History Encyclopedia, James Dean was the fourth president (mayor) of Freeport (1902 to 1905).  A wealthy retired merchant from Brooklyn, Dean was a Civil War veteran and served as a captain with the 72nd New York Volunteer Infantry Regiment and was a past commander of the Grant Post, Grand Army of the Republic (GAR). He collected flintlock muskets, powder horns, swords and other war relics. Dean also served as the treasurer of the South Shore Yacht Club. At the turn of the twentieth century, he was president of the Freeport Club. The source adds that Dean Street is also named after him.

New York Heritage Project features two historical photographs of Colonel Dean, one a black and white ¾ view portrait ca. 1926. In the second image, the colonel, identifiable by his distinguished mustache, also appears seated at the front lower right at a long banquet table at a formal occasion, celebratory dinner or fundraiser. Although the photo is undated, further research from the February 19, 1915 edition of the Nassau County Review, suggests the dinner may have been the annual dinner of the Freeport Club, of which Dean was an officer starting in 1900.

Replete with “musicians play[ing] and sing[ging] all the latest up-to-date songs of the days, [the] rugs were taken up from the floor, several danced buck and wing…” it was regarded as the “the most successful dinner ever given by the Club.” The Colonel’s address at the event was described as “one we should all remember,” reminding the membership, “of the many pleasant evenings we spent together in the building, the same one [we had] planned and fought for… fifteen years ago.” Some highlights from the dinner menu that night included: Oyster Cocktails, Consomme en Tasse; Halibut, Tarter Sauce; Larded Fillet of Beef, Mushroom Sauce; Asparagus; Waldorf Salad au Pimeto; Cream Eclaires; and Tutti Frutti Ice Cream. The addition of Cigarettes and Cigars after dessert is also an interesting commentary on the times!

Col. Dean’s obituary, dated July 7, 1918 appeared in the Long Island Herald. Dean had been battling arterial illness for about a year prior to his death. Prior to moving to his home of South Bayview Ave., it was noted that he owned the large home on South Ocean Avenue. Although Dean only achieved the rank of Captain, in his lifetime “he was called by the honorarium “Colonel”, and owned a collection of over 1,500 firearms and other implements of warfare.” Meanwhile, the tribute which appeared on the same date in the Nassau Post remembered him as “a man of high character and gave the best that was in him to any work he undertook… a man was foremost in all movements for the public good.” He was also memorialized as “a brave soldier in the civil war [sic] and a worthy wearer of the bronze button of the Grand Army.” 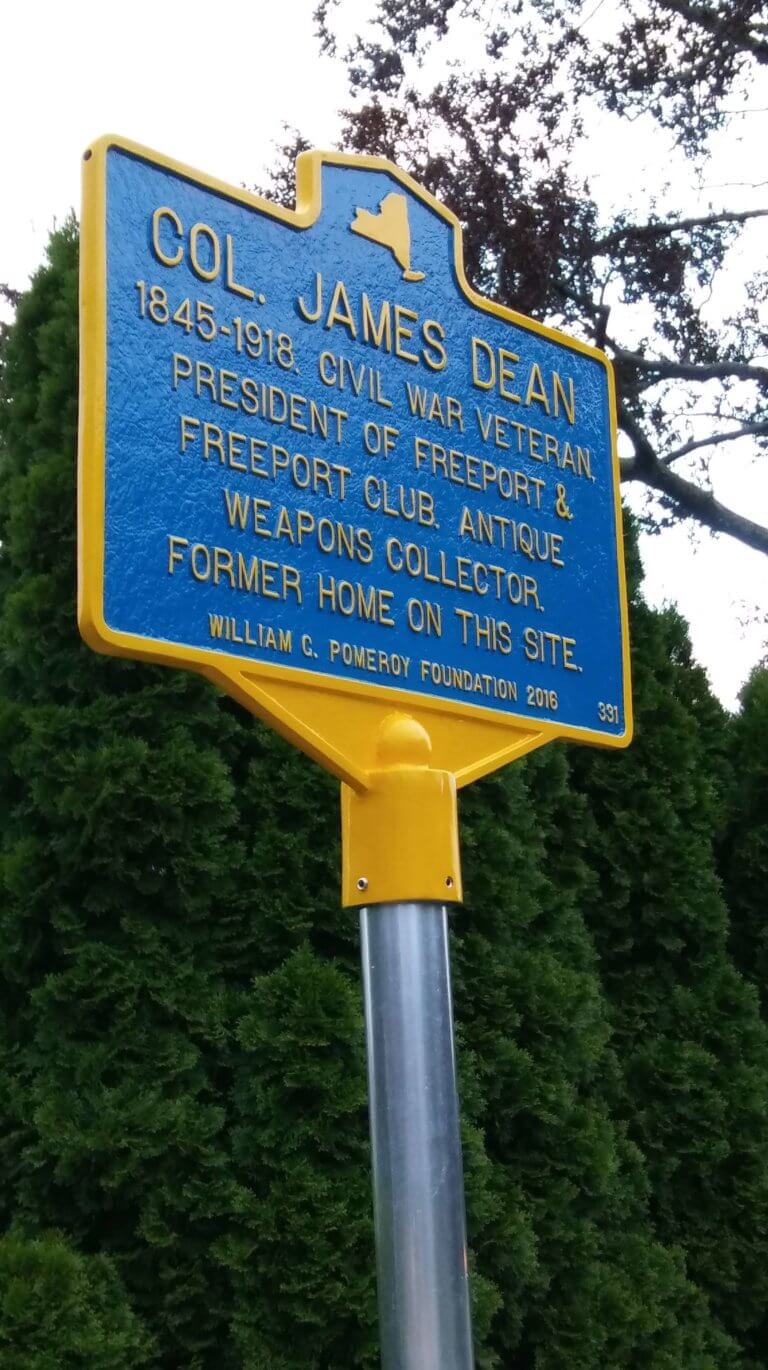