Columbus Avenue School was built in 1914 at a cost of $70,000. Designed by noted architect Charles M. Hart, the school was described as “handsome brick structure” and was the first school in Freeport to have a gymnasium.

Columbus Ave. School appears on the Freeport 2 E. Belcher-Hyde Map Nassau County 1914 Long Island as a lot without a building called “School Property/School District No. 9.” The lot is bordered by Columbus Ave. on the west, Rutland Ave. on the east, and Orchard St. on the north.

“New School Corner Stone to Be Laid” made the front page of the October 8, 1914 edition of The Nassau Post. Highlights from the exercises at the laying of the cornerstone planned for October 16, at 2:30 pm, included a march of “all of the school children of the Freeport schools above the fourth grade, numbering fully 1000” to the new building, as well as Charles M. Hart, architect of the building “[to] hand the trowel to the president of the Board, Rbt. H. Hunt, who will officially imbed the stone.” A flag raising and military salute by school children and guests alike, the exercises were to be closed with the singing of the Star Spangled Banner.

It was projected that Columbus Avenue School, when complete, would be “one of the best equipped of the Freeport Schools.” The article boasted “twelve classrooms, with office and storerooms, and as assembly room with a seating capacity of five hundred.” It was also noted that $82,000 had been appropriated by the school district for the project.

Architect Hart who was supervising the construction, and, “insisting upon thorough work” believed the building would be completed by “the first of the year” [January 1, 1915]. The article explained the building would be ready for immediate “occupancy [of] 150 pupils from the Grove Street and Seaman Avenue Schools” who would be transferred to relieve overcrowded classrooms, a recurring problem in the growing resort Town of Freeport–as demonstrated by other historic markers granted in the area by William G. Pomeroy Foundation. “Superintendent Moon [was] making the needed provision for the opening” it concluded.

As of 2019, Columbus Avenue School remained a part of Freeport Union Free School District. Serving the youngest learners in the district, 300 Universal Pre-K and over 200 Kindergarten students attend the Early Childhood Education Center. 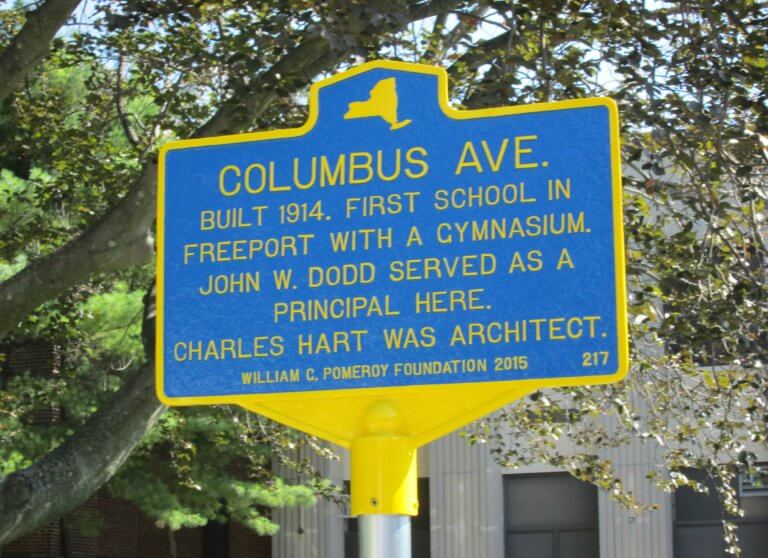 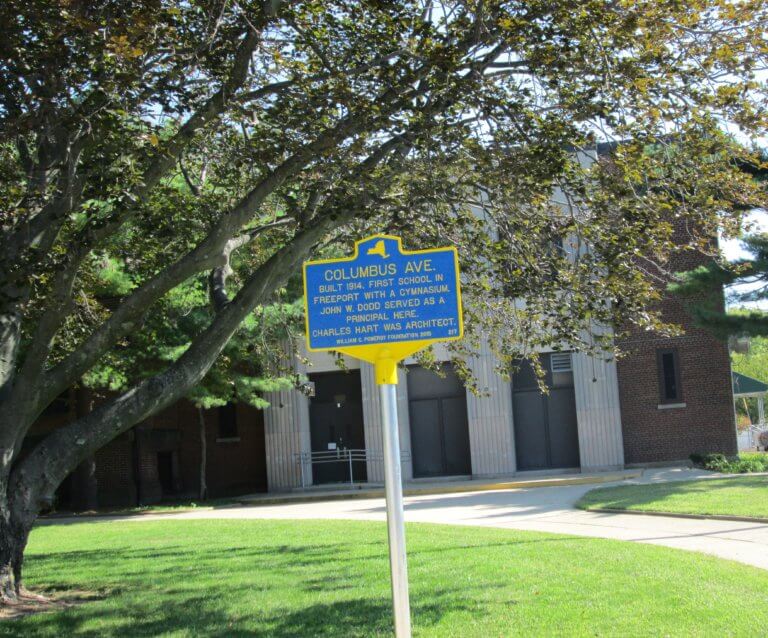