As early as 1770 Cornwall Landing served an important role in the economic development of Upstate New York. Located along the Hudson River, Cornwall Landing was only a few hours from Albany and New York City. In its prime, this area was a bustling commercial and industrial hub. Numerous factories and mills produced brick, processed timber, built boats, and manufactured a variety of other goods. Steamboats and trains shipped freight and ferried passengers to and from New York City. This significantly contributed to the growth and prosperity of Cornwall-on-Hudson well into the 1940s.

Although the session of the Fortieth Congress of 1868 recorded an act to construct a wagon road from West Point to Cornwall Landing, in Orange County, the Village Museum archives evidences “a highway leading from Cornwall Landing to the Village of Canterbury” recorded in the April 13, 1813 Last Will and Testament of Henry N. Clark. Henry N. Clark also appeared earlier in 1810 U.S. Federal Census as a Cornwall resident.

While History of Orange County, NY (1881) notes that the completion of the Erie Railroad to Piedmont in 1837 “struck a fatal blow to the freighting interests of Cornwall”, Cornwall (1873), a journal by Lewis Beach, remembered the freighting business carried out from dock to dock by the Tobias family “at the beginning of the present century… which stood near… Mr. Gillis’ brick-yard.” Although Dr. Isaac Tobias was thought to have constructed a dock and built the sloop Hector, since there was “no communication between river and the table-land above” he built a road at his own expense “as far as the first bridge, where it connected with… the road to Willis-ville”.

In addition to freighting on the Hudson, the many ads in the NY Herald, 1869-1873 as well as the 1872-1873 Business Directory suggest an already thriving mill economy at Cornwall Landing from grist and feed mills, glassworks, steam boiler manufacture, lumber dealers to the commerce of grocers, general merchandisers, furnishing goods, lawyers and insurance agents, livery stables, as well as hotels and boarding houses sprung up to accommodate mill workers.

The geo-historical nature of Cornwall Landing was captured in the journal by Beach:

On leaving the boat, at the landing, the stranger is ushered upon a fine, capacious dock, crowded with equipages of various kinds. The landaulet of the affluent Metropolitan stands side by side with the more modest carry-all of the farmer-Boniface. Numerous stages of motley character compete for the patronage of the out-pouring passengers. It is no unusual thing to see over a hundred carriages on the dock, awaiting the arrival of the Powell. Lady and gentleman equestrians are sprinkled here and there, having come down to welcome expected friends. The scene is an animated one and invariably excites the surprise of the stranger. The vehicles are soon filled—or rather, loaded—to the brim, the more unfortunate taking refuge on the roof-tops of the stages, and the half-mile procession winds its way up the hill to the table-land above.

Among the industrial pursuits highlighted by the county history is the “extensive business” of the lumber-yard and planing-mill first established in 1853 by partners Mead and Taft at the junction of Newburgh Road and Hudson Street. Removed to Cornwall Landing in 1868, their buildings burned in 1879. Once rebuilt, “now large and convenient” a feature of their business was the “manufacture of portable cottages adapted to the fashionable watering-places, and… the erection of large churches and other public buildings.” To this effect, “MEAD & TAFT, Architects & Builders” has prominent display ad space in the business directory cited above.

James P. Kirby’s 1880 Map of the Highlands of the Hudson, Orange Co. and corresponding business directory highlights the location of several paper and linen mills along the Hudson River at Cornwall Landing. Meanwhile, a correspondence report completed by Charles G. Weir, Assistant Engineer, Army Corps of Engineers in 1890 maintained that these had not been in operation for two years, the principle industry on the creek now being brick. While improvement to the channel itself was ill-advised to support the brick shipping volume, development of a “30-foot draw where the channel of the creek crosses the railroad, [ ] permit[ing] vessels to enter” would create “considerable commerce… as there are valuable brick properties on the creek.”

A June 1891 Map of Hudson River at Cornwall, NY from the Moodna River, otherwise known as Murder’s Creek to the channel or deep water of the Hudson River surveyed by the Army Corp of Engineers to comply with the River and Harbor Act of September 19, 1890 evidences the 30-foot draw proposed above. In addition, A. H. Mueller & Co.’s 1903 Atlas of Orange County for the Town of Cornwall documents Central & Hudson Steamboat Co., Hedges Brick Yards, and Cornwall Station at West Shore Rail Road.

In 1936 an Act of Congress authorized the Secretary of War to acquire land at or near Newburgh, in Orange County, NY, for aviation field, military, or public purposes. To this effect, the August 27, 1942 edition of The Cornwall Local announced “[Cornwall] Shipbuilding Company Leases Mead & Taft Plant & Property”. As many as 1000 men were anticipated to construct a large number of “knock-down cargo barges” for the Army Transportation Corps Service of Supply. In addition, it was reported that “negotiations were underway for additional shipyard work and for the construction of gliders for other government agencies.”  The article added that Cornwall Shipbuilding property and plant was the ideal location for “building ships of any size up to 180 feet long”. Including 40 acres of land and a water frontage of 2600 feet on the Hudson River, a main building and mill with 25,000 square feet, it also boasted railroad siding to both O & W and West Shore Railroads.

The bustling industries may have ceased, but, as of 2019, in their place are the recreational areas of Donahue Memorial Park and the Cornwall Yacht Club. 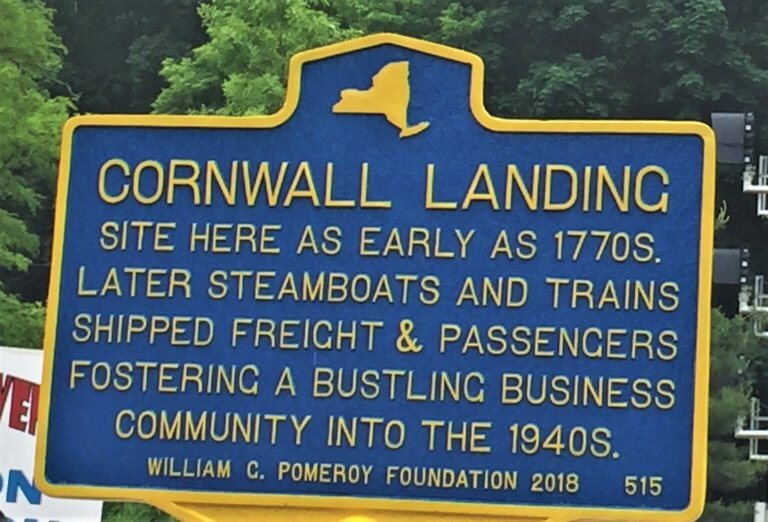