A few miles north of the South Brookfield, New York lies the site of a mill where Craine brothers, William and Thomas developed and patented new innovations for the farming and agriculture industry during the late 1800s to early 1900s.

According to their obituaries, William was born on June 29, 1835 with Thomas born several years later on July 24, 1842. The boys were born into a large family in the Isle of Man, located in the Irish Sea between England and Ireland. Around 1850, their family immigrated to the United States and settled near Brookfield.

During the Civil War, Thomas enlisted in the Union Army and served in the 7th New York Independent Battery. After the war, he married Elizabeth Camenga in 1867. Their union produced three sons: Clifton, Harold and Robert. Thomas operated a saw mill, a cheese box factory, and made egg crates in Brookfield.  Sadly in the early morning hours of October 18, 1914, Thomas passed away.

According to Zur Craine’s 1947 book, Craine Silo Shadows: How Free Enterprise Works for Average Folks, upon arriving in Brookfield, William founded several businesses including a saw and planing mill, furniture factory, a repair shop and a “large circular roller skating rink.” He married twice; the first time to Juliette Hinkley, who passed away, and then to Josephine Dutwieler. William had five children: Leo, Robert, William, Zur and Mable. William was a very innovative person who patented several inventions such as the sugar scoop, egg carrier, and indented screw (Craine Silo Shadows).

William soon joined the feed and grain business in the late 1800s and sought to develop a better method for storing feed.  His solution was the Triple Wall Silo and in the early 1900s he built a prototype. According to a 1922 advertisement in The Field Illustrated, “strength is assured in a Craine Silo. The walls are triple – usual staves inside, Silafelt in the middle, Crainelox on the outside, binding the whole into a strong, beautiful silo, scientifically correct in every detail.”  In 1911, William’s son, Zur traveled to Norwich, NY and contracted with a company to build the silos. By 1917, the Craine Silo Company, later known as Craine Inc., was born (Official Gazette of the United State Patent Office, vol. 436, 1933). In the 1966, Craine Inc. sold all its stock to the Agway Corporation. 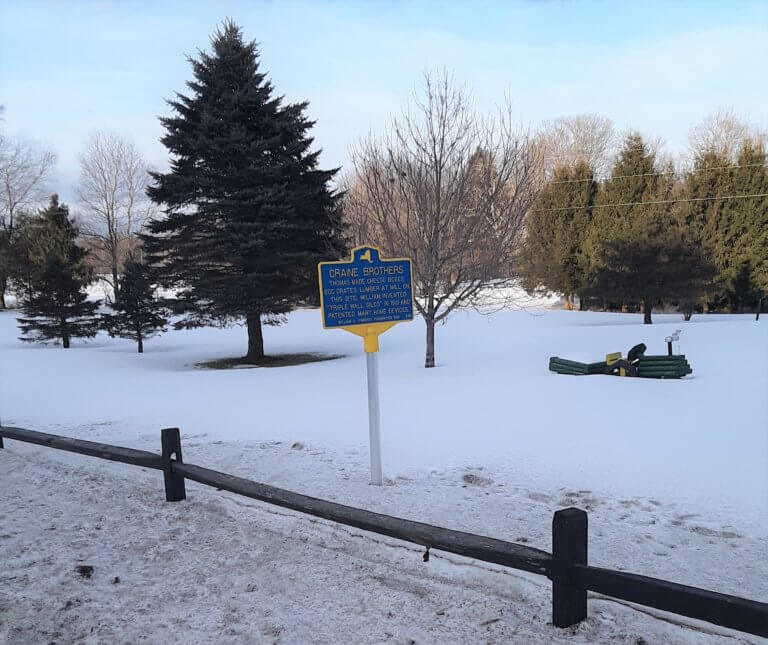