This is the site of the Curtis Homestead which was the home of General Newton Martin Curtis (1835-1910). General Curtis served during the U.S. Civil War, received the Medal of Honor, and later served as an assemblyman for the New York State Legislature. His Medal of Honor citation reads that Curtis was “the first man to pass through the stockade, he personally led each assault on the traverses and was 4 times wounded.”

Jonathan Curtis, father of the famous general, bought the homestead on November 11, 1830. It included 50 acres on the south side of Black Lake Road in De Peyster, New York. (Curtis Indenture, 1830) It was here that Jonathan raised his children including Newton Martin (N. Martin). Jonathan’s will left his old homestead to his son Gates Curtis while his other farms, called King and Stillwell, were left to Newton Martin Curtis. (Will of Jonathan Curtis, 1860) N. Martin Curtis was born on May 21, 1835 in De Peyster and received his basic education at district schools before attending the Gouverneur Wesleyan Seminary. After his studies he read law for a brief period in Ogdensburg but returned home due to ill health and worked on the family farm just prior to the outbreak of the Civil War. Almost immediately after the fall of Fort Sumter he began organizing a company of local volunteers which was soon sent off to battle. (Norwood News, 1910)

Curtis began putting his company together on April 14, 1861 and received a commission as Captain of the 16th NY Volunteers on May 7 the same year. (Roster, 16th Regiment NY Infantry, 1861) He quickly advanced through the ranks and gained popularity with his troops. He was given the rank of Lieutenant Colonel in 1862, Colonel in 1863, and Brevet Brigadier General for distinguished service in 1864. (Ogdensburg Journal, 1891) The battles of Harrison’s Landing, Crampton’s Pass, and Antietam are among the many he participated in. (Norwood News, 1910)

But N. Martin Curtis’ most famous battle was the capture of Fort Fisher on January 15, 1865, during the last stages of the Civil War. Fort Fisher was one of the strongest earthwork fortifications of the war and it guarded the crucial port of Wilmington, North Carolina, one of the last held by the Confederacy. This made its capture by the Union a key factor in ending the war. A contributor to the New York Times in 1914, at the beginning of World War I, credited General Curtis with innovating the tactic of ‘open attack’ against fortifications. This consisted of infantry assaulting a fortified position in open formation rather than in the massed columns which had long been the custom of European warfare. (Ogdensburg Journal, 1914) Curtis was severely wounded and lost his left eye while leading the successful charge against the fort. In recognition of his role in the battle, Curtis was awarded the rank of Brigadier General on a provisional basis, as well as the Medal of Honor and a Congressional resolution of gratitude. (Potsdam Herald-Recorder, 1911)

After the war, General Curtis returned to his farm in Ogdensburg and held numerous civilian positions, including customs collector, agent of the US Treasury, and president of the St. Lawrence County and New York State Agricultural societies. He also was elected Commander of the Grand Army of the Republic, a Civil War veterans’ association, in 1888. His popularity with veterans and famers in the county formed the foundation of his long political career. (St. Lawrence Republican, 1888) He was a member of the New York State Assembly from 1884 to 1890 and served as a representative in the 52nd, 53rd, and 54th sessions of Congress. (Potsdam Herald-Recorder, 1911)

In 1882, Newton Martin Curtis was accused of illegally taking money from office-holders for political purposes, however, the original indictment was thrown out due to an oversight by its author. (Commercial Advertiser, 1882) According to General Curtis, when he was 14 years old he came into the possession of a book authored by a Newton M. Curtis. To avoid any confusion with this author, he always signed his name as N. Martin Curtis from that moment on, and all his military commissions and honors were under this name. As a consequence, however, newspapers occasionally referred to him as ‘Nehemiah Martin Curtis’, as they simply assumed his first name from the initial. (Ogdensburg Journal, 1889) The original indictment from 1882 was accidently written with the name ‘Nehemiah’, creating a loophole which resulted in the charge being thrown out. A new indictment with his correct name was issued within the year (St. Lawrence Herald, 1882), however the minor scandal seemed to have no effect on his future political career or reputation as an upstanding citizen. (Commercial Advertiser, 1883)

During his tenure in the state assembly, General Curtis was a consistent advocate for the abolition of the death penalty, reportedly introducing a bill to that end in every session from 1884 to 1890. He supported this position not only on moral grounds but also on practical grounds, arguing that the death penalty hindered the ability of witnesses to testify truthfully and for juries to return impartial determinations of guilt. (Ogdensburg Journal, 1900)

Curtis was apparently in good health during his later years and was active in organizations such as the society of the Army of the Potomac as late as 1907. His sudden death at the age of 75 on January 8, 1910 came as a shock to his home county of St. Lawrence. He dropped dead from a stroke on the street near his New York City home at Irving Place. (Norwood News, 1910)

Only several months later the St. Lawrence State Hospital named one of their recreation halls after the late general. (Ogdensburg Advance and St. Lawrence Weekly Democrat, 1910) A few years later in 1913, a monument featuring a bronze statue of Curtis was unveiled in Ogdensburg with much ceremony. (Gouverneur Free Press, 1913)

In 2017, a historic marker funded by the William G. Pomeroy Foundation was erected at the site of his family’s former homestead. 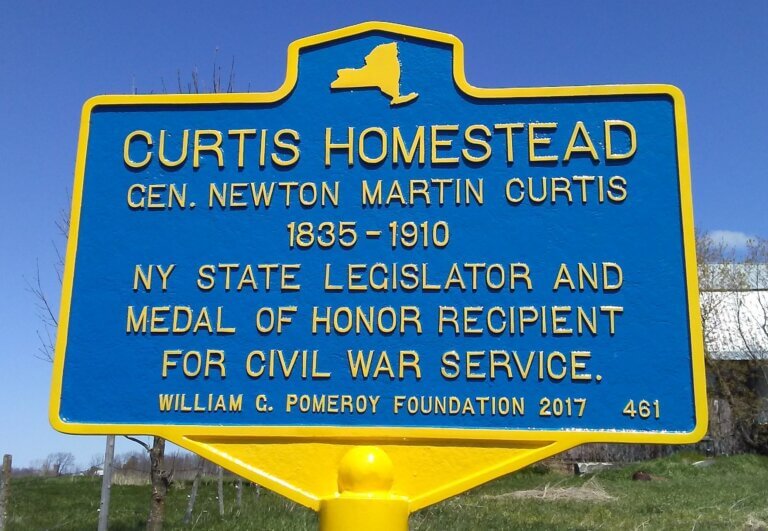 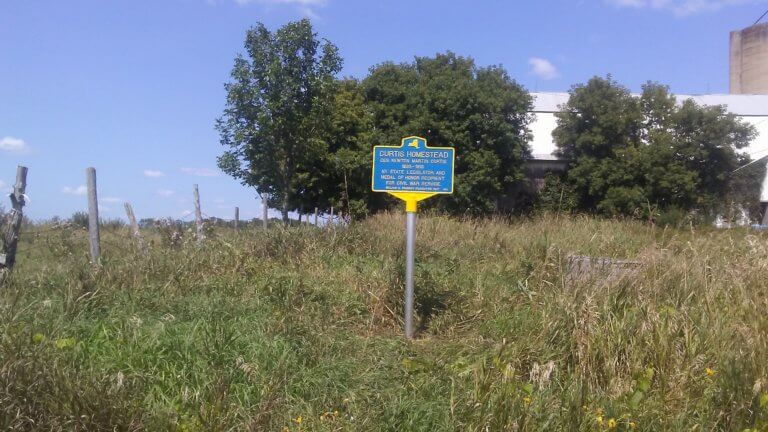 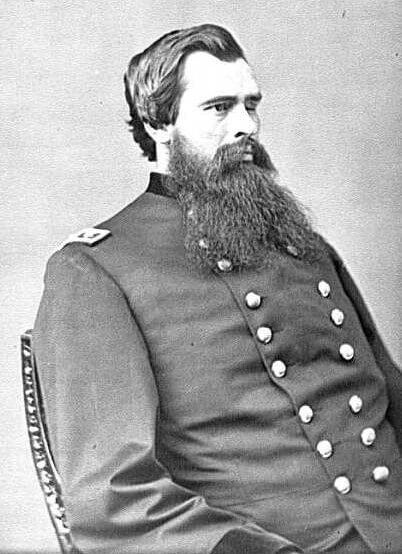