In the early morning of Nov. 19, 1916, a devastating fire in the village of Roscoe, NY engulfed more than 20 buildings, including two major hotels. Despite the loss of homes and businesses, no lives were lost to the blaze. The resultant property loss was estimated at close to $175,000. While the cause of the fire is unknown, it is believed to have originated in a building that housed the local bowling alley.

Around two in the morning on November 19, 1916, residents of Roscoe were awakened by what seemed to be an explosion from a building owned by Frank Mauer. This building, containing a bowling alley along with residences above, was soon engulfed in flames. The explosion led many to the conclusion that a coal stove explosion was responsible for the inferno which began spreading across the village. Local residents Wesley Snipe and his mother, Mrs. Sipple, lived above the bowling alley. With flames consuming the first story below them, they were forced to escape the building by jumping onto the street below. Mrs. Sipple broke her ankle in the process, but fortunately this was the only injury caused by the fire. (Sullivan County Record, Nov 23, 1916)

The fire continued to spread and engulf the village’s commercial district. Firemen and volunteers from Liberty and neighboring communities were called in to help. However, a failure of the hydrant system prevented the firefighters from stopping the spread of the flames. Two factors contributed to this failure. The Roscoe water system apparently had no reservoir to speak of, the water flowed from a brook dammed by a loose stone wall with a pipe leading to the hydrants. With more than one hose attached to the hydrants, the water pressure was divided and immediately weakened to the point of uselessness. (Sullivan County Record, Nov 30, 1916) Additionally, when the fire spread from the Mauer building to the neighboring hardware store, a hose-line was burned off and water was hopelessly wasted. Had water pressure been sufficient the firefighters reportedly would have been able to contain the fire at its original source. (Sullivan County Record, Nov 23, 1916)

Through the night the fire spread both east and west, engulfing the Voorhees department store, the hardware store, and the Faubel house, a hotel. On the east end of the street, the fire halted at the brick jeweler’s and optician’s building, though its interior was nonetheless ravaged. On the west, the flames were blocked by the First National Bank building, but the sparks and flames managed to spread the fire to the opposite side of the street, where it burned down the Criterion Theater and ignited one building after another. The destructive fire was only contained when firefighters detonated two small buildings with dynamite borrowed from a local railway contractor. (Sullivan County Record, Nov 23, 1916)

As the village burned, locals and business owners hurriedly moved as many of their belongings and goods onto the street as possible. The confusion even enticed some to engage in minor looting of the jewelry store as well as making off with some of the merchandise left on the street. Some even took new shoes from their boxes and replaced them with their old shoes. At the end of the day, a number of families were left homeless and at least 18 buildings, all wooden, were destroyed, and a number of others damaged. (Sullivan County Record, Nov 23, 1916) Estimated losses were as high as $175,000, with insurance agencies only covering a fraction of this sum. (Liberty Register, 1916)

A number of residents displaced by the inferno had to move or abandon their business. For example, William Voorhees, owner of the department store, managed to sell off his remaining commodities saved from the fire.  (Sullivan County Record, Dec 28, 1916) Charlotte Faubel, owner of the Faubel hotel moved to Binghamton in order to live with her daughter. (Sullivan County Record, Dec 21, 1916)

In the aftermath, the town planned to rebuild in brick, though some of the structures, including the major hotels, were never replaced and instead more modest residences were built in their place. Some local farms continued their activities in temporary structures that year. In order to prevent future disasters, proposals began to be discussed to remedy the water pressure issue, including suggestions to dam the creek at another location or to instead draw water from the nearby Punch Bowl Lake. (Sullivan County Record, Nov 30, 1916)

As of 2019, a historic marker funded by the William G. Pomeroy Foundation stands at the site of the former Beaverkill House, one of the hotels lost to the fire. 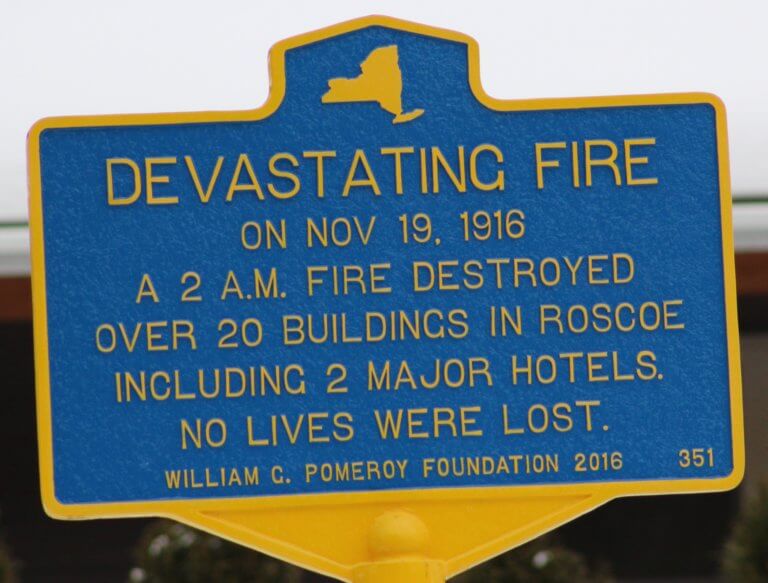 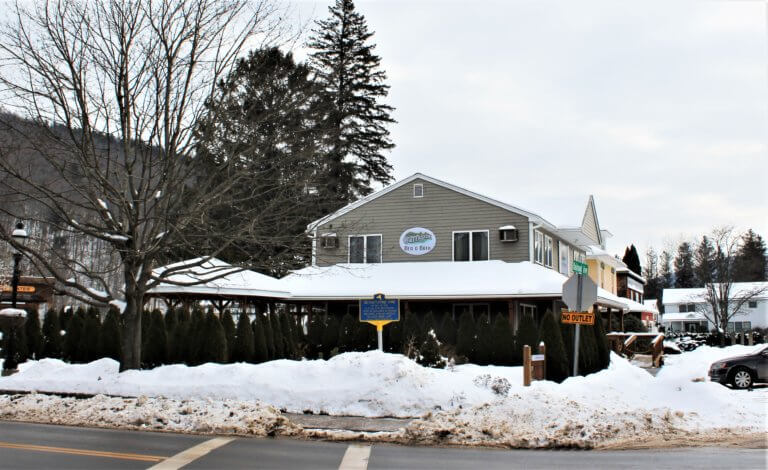