At this site in Copiague, New York, was once the All-Weather Drive-In Theatre. Built 1957 at an estimated cost of one million dollars, this drive-in was on the cutting edge of family entertainment and at 28 acres was one of the largest drive-ins in the U.S. The theatre layout combined an outdoor viewing area with room for 1,370 cars with an indoor theatre of 1,500 capacity. The drive-in possessed a variety of features such as an amusement park, tally–ho train, and cafeteria. It closed in 1984.

Originally built by Prudential Theatres and later operated by United Artist Theatres, the Drive-In Theatre was also known colloquially as the “Johhny All-Weather” Drive-in. A 1957 news photo caption identifies Johhny All-Weather as “the gallivanting aide-de-camp to the manager and general merrymaker for the patrons.” A Popular Science article from the same grand-opening year titled “Million-Dollar Drive-in Offers Films, Fun and Food” announced that the “fun starts at one p.m.” The article also humorously attributes the growing American drive-in trend not only to suburbanization and more automobiles, but to a shortage of babysitters. 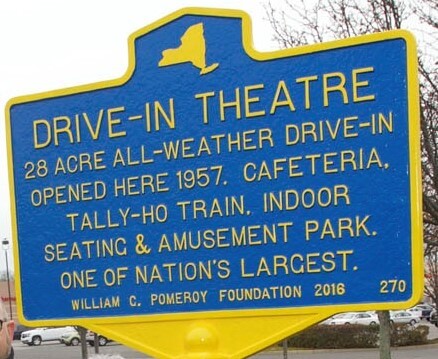