The Richmond Aqueduct, also known as the Montezuma Aqueduct, was part of the Erie Canal and allowed canal waters to pass over the Seneca River near Montezuma, NY. Construction began in 1849 and the structure remained in use until 1917 when the Seneca River was made navigable for present-day Barge Canal. Before the central portion of the aqueduct was dismantled, it had 31 arches and was approximately 895 feet in length.

Once the Erie Canal opened for business in 1825, it received regular maintenance to improve travel time and safety. Locks, aqueducts and bridges were just some of the amazing innovations and improvements incorporated into its design. An example of one such improvement began in 1849 when New York State, “decided to relocate the canal to higher ground, and to build an aqueduct to carry boats across,” the Seneca River in Montezuma (Town of Montezuma website, 2019).  Van Rensselaer Richmond from Wayne County, NY, was the designer and engineer of the aqueduct, at this time he was also State Senator and Surveyor (Democrat and Chronicle, 15 Aug 1961).

Construction proved to be extremely difficult due to its location. Montezuma is home to low-lying marshland prone to flooding and is water-logged at all times. To solve this dilemma, “wooden pilings were driven over 9 feet deep,” but unfortunately they did not strike a rock bottom. Undeterred, builders then placed a layer of logs at the bottom of the Seneca River, with the stone construction built atop (Travels of Tug 44 website, 2013). The aqueduct was completed in 1857 to much fanfare, as the Canal Commissioner reported to the State Legislature that this was ‘one of the largest and most important structures on the Erie Canal’ (Town of Montezuma website). According to The Ithaca Journal from March 29, 1969, “the aqueduct [was] 894.5 feet long and 50 feet wide,” and there were “thirty-one stone arches” that supported the towpath. These dimensions made the Richmond Aqueduct the second largest aqueduct on the Erie Canal (The Erie Canal website, 2012).

The Richmond Aqueduct remained operational until 1917 when the majority of the Erie Canal was enlarged into what was known as the Barge Canal (The Erie Canal website). During construction of the new canal, the middle of the aqueduct was destroyed in order to allow boats to travel freely along the Seneca River. As of 2019, seven arches on the east side remained, while only three arches still stood on the west side. The remains of the Richmond Aqueduct can be visited in Montezuma through the town’s Heritage Park. 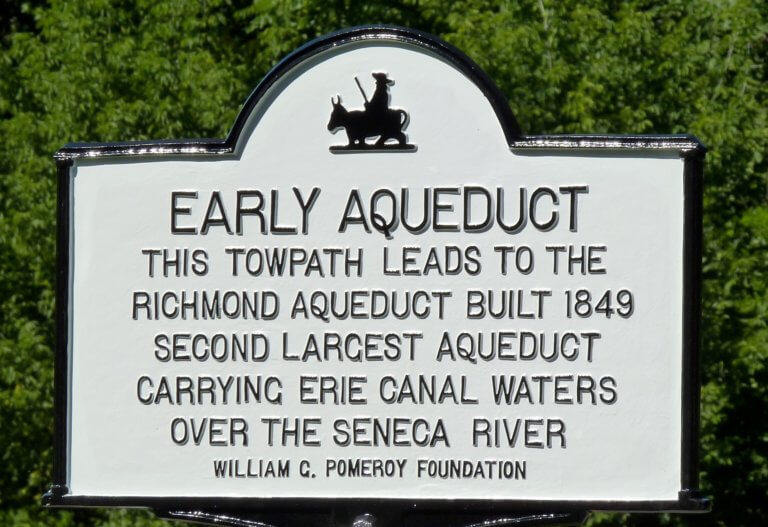 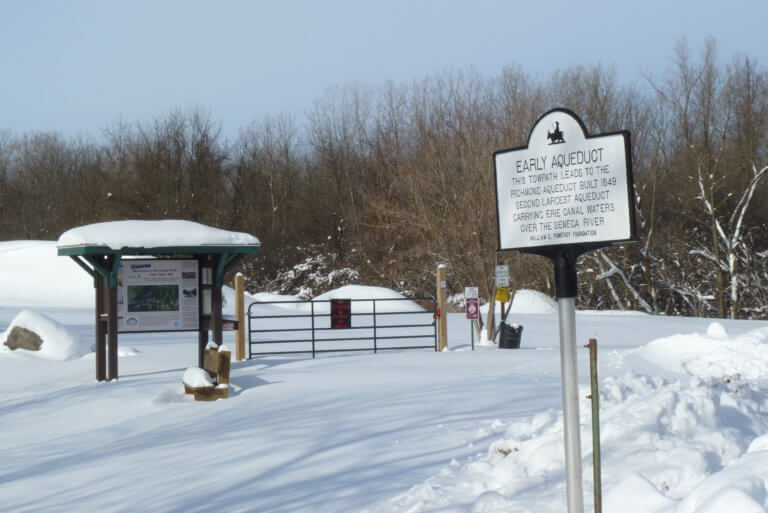