The Little Salmon and Big Salmon Creeks run a short distance away from Cayuga Lake. The area where the two creeks meet is known as the hamlet of Forks of the Creek, located within the Town of Genoa.

This area was originally home to a group of Native Americans known as the Cayugas. During the American Revolution, the Cayugas allied themselves with the British rather than the Colonists. In 1778, Native Americans and Loyalists carried out a series of raids to weaken the Continental Army. In retaliation, General George Washington dispatched General John Sullivan and his forces to lead an expedition, to destroy principal villages and food supplies of the Cayuga and other Native American Nations. These principal villages included those along what is today known as Cayuga Lake, including the area of Forks of the Creek. After the revolution came to an end, many new residents arrived to this area.

Due to its proximity to water power, this area was the site of an early grist mill and saw mill which provided economic prosperity. Residents built industries along the site where the two creeks converge. According to Elliot Storkes’ 1879 book, History of Cayuga County, New York, around 1830 a saw mill and a grist mill were constructed. The grist mill was located on the west side of the forks and had three “runs of stone” of grinding wheat, corn and buckwheat. The saw mill was on the east side and had, “an upright saw and a circular lath saw” for cutting lumber (History of Cayuga County, New York). Both mills received power from the same dam located at the forks.

No trace remains of either of Aurora’s early mills. 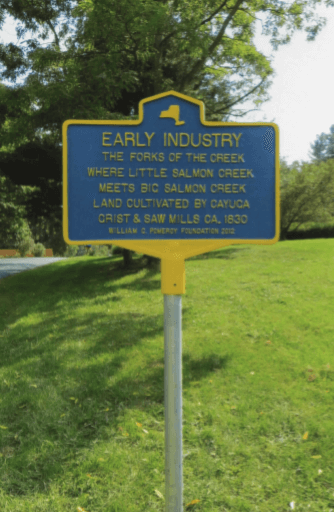