The Erie Turntable is a turning section of railway originally constructed in 1854. One of the last remaining in the nation, the turntable operated until 1987 and was restored to full operating condition in 1996.

Featured in National Geographic’s “Scenic, Wild Delaware River” trip guide, on March 26, 2016 roadsideamerica.com noted its location as “hidden behind a Rite Aid Pharmacy and vacant strip mall in Port Jervis.” It was also noted by the blogger that there was originally a roundhouse on the site which was lost to arson.

Although no longer standing, the roundhouse was significant historically because it had the Erie turntable at its center and served as its enclosure. The detail of a parked train car, showing how the enclosure was used and integrated with the tracks, is visible in Boucher’s July 1971 interior view of the west wall. Also in railroad web archives is a series of “now” photos from 2005 documenting a vacant lot from the arsonist’s fire, which occurred in the 1980s. Vestiges of the original rail spurs which were utilized as repair bays are visible as well as views of the restored turntable. A view showing the bed of the turntable on which engines and cars were sent to individual track spurs for repair or directional change is perhaps the most compelling to the visitors and railroad enthusiasts alike. The structure which appears beside the turntable bed is the control booth.

The Cheasepeake and Ohio “Chessie” #614 was photographed by Doug Thornton on the turntable during one of the train’s several visits in the late 1990s. Apparently, enthusiasm for maintaining the turntable ebbed after the steam locomotive experienced problems with performance. The web archives mentioned federal railroad regulations necessitated its retirement to the C&O Railroad Heritage Center in Clifton Forge, VA.

On January 25, 2000, Peter Osburne, City Historian reported that the turntable stood ready for use by steam or diesel locomotives. While there were no recorded excursions in 1999, additional excursions were hoped for the future. Osburne also noted that a new flag pole and interpretive display has been placed on the site. Visitors were regularly drawn to the “only operating turntable in the region and the longest operating turntable in the East.” In 2016, a newsletter by the Tri-States Railway Preservation Society announced plans to create a new railroad museum by the turntable, consisting of several rail cars. The newsletter also brought news of Chessie and the “old friend [l]ocomotive[‘s]” possible return to the turntable for the future museum. 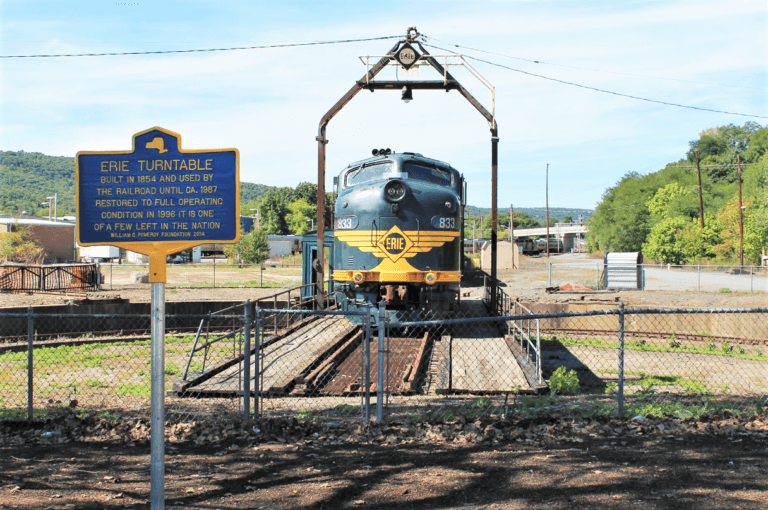