On August 9, 1849, the Evergreen Cemetery Association was formed for the purpose of procuring land for use as a cemetery. The Association wished to create a “rural cemetery,” a 19th century movement to create a park-like, picturesque environment.

That first meeting of the Evergreen Cemetery Association was recorded by then secretary, Charles F. Tabor, who also happened to be hosting the meeting at his house in Keeseville. Those notes he took declare the purpose of the association to be “procuring and holding land to be used exclusively for a cemetery,” which the trustees felt should be a “rural cemetery.” The idea for rural cemeteries is documented in Howard Evarts Weeds book Modern Park Cemeteries (1912), where he discusses that burials were originally done in churchyards. This served two purposes, with the first being the idea that the dead needed to be buried as close to the “sacred edifice” as possible. The graves were also able to serve as a reminder to “the living of the virtues of the dead and man’s mortality.”

Increases in urban populations forced cemeteries away from churchyards and to less crowded areas, and the first recorded rural cemetery in America was Mount Auburn in Boston (1831). These new cemeteries were meant to serve as an escape, with the Center for Research Libraries noting that rural burial grounds were “designed with a romantic vision” and meant “to provide sanctuary, solitude, quiet, adornment, and beauty.”

The Evergreen Cemetery, designed to be one of these rural cemeteries, is the final resting place of many residents from the area. One of those interred is Lt. Col. Gorton T. Thomas, whose grave marker says he was wounded at the Battle of Bull Run and passed away on September 3, 1862. He was also mentioned in an article from the Essex County Republican on May 29, 1884 that was discussing the Memorial Day remembrance for that year. The service planned was to honor the veterans in the cemetery, and Lt. Col. Thomas was listed first. The day’s plans included marching through town into the cemetery, where there were multiple hymns, prayers, and songs sung. That Memorial Day in Evergreen Cemetery ended with those present singing the hymn, “My Country, ‘Tis of Thee.”

Another notable grave at the cemetery belongs to Richard Keese, whose death notice in the New York Herald on February 8, 1883 stated that he had been the last surviving member of the Twentieth Congress of the United States. Keese was said to have served from 1827 to 1829, and the article even attributed the founding of Keeseville to him.

Despite the cemetery’s intentions of being a place of sanctuary and beauty, and despite its notable inhabitants, there have been documented evidence of vandalism within the property. A former president of Evergreen Cemetery wrote in to the Essex County Republican on September 20, 1946 to complain about the instances of destruction, noting that “for the past four years [they] have been annoyed by vandals.” A more recent article from September 12, 2012 in the Press-Republican shows the Board of Trustees President for the cemetery express the same concerns. Stating that “there was a lot of vandalism,” it took grants from the State Division of Cemeteries to repair up to 200 grave stones. As more work was done, one person who has family members at Evergreen Cemetery noted that “it looks like a park now,” harkening back to the original intentions for the land. 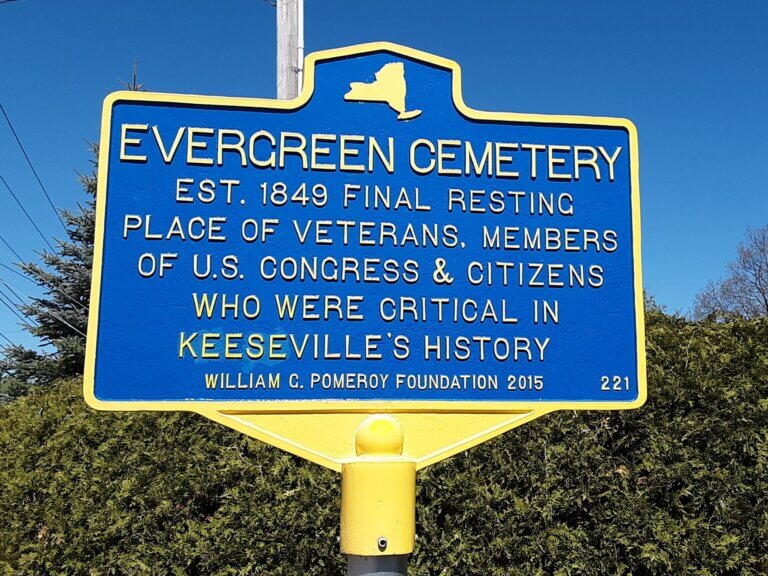 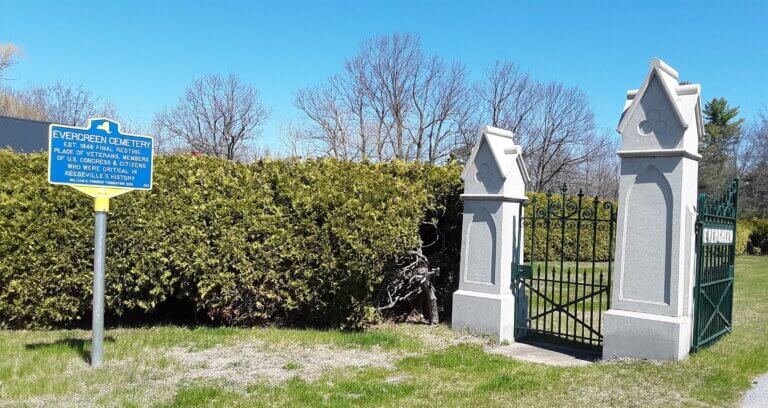