Located in Franklinville, North Carolina, Faith Rock sits on the banks of Deep River several hundred yards upstream of the Island Ford. Said to be one the major geographic landmarks for the area, it is described as being the site of a legendary Revolutionary War incident that took place in Randolph County. While accounts vary, the story of Faith Rock always ends with one man jumping 50 feet into the river on the back of a stolen mare.

Occurring in 1782 near the end of the war, Colonel David Fanning retells the story as he knows it in his book The Narrative of Colonel David Fanning: A Tory in the Revolutionary War with Great Britain, which details his time in North Carolina during the war. As Fanning recounts, he was riding along a road when he noticed a wagon that he decided to stop. It just so happened that the man driving the wagon, Andrew Hunter, had been arrested and then paroled by the British. Fanning noted that Hunter was breaking his parole and would therefore be punished with death; a punishment that Hunter was keen to avoid. Taking Fanning and his men by surprise, Hunter jumped on the back of Fanning’s mare and made his escape. Before he could get away, however, Hunter was shot in the shoulder and was forced to seek treatment from a doctor. While away, Fanning found Hunter’s plantation and took his wife captive, hoping to use her as leverage for the safe return of his mare. Though Hunter was willing to return to the mare to secure the safety of his wife, Fanning states that he was unable to make the exchange and was forced to release Hunter’s wife and leave North Carolina with the British.

The story as Fanning told it began to circulate but with a different, more dramatic ending. Stated as first appearing in the Southern Citizen on August 24, 1838, the story would continue to be reprinted and spread, sometimes even with Fanning’s name being spelled as “Fannon.” These stories being printed in newspapers and magazines made Fanning out to be vicious and vindictive, stating that he had no problem killing “the innocent and the helpless in cold blood.” Despite his “despotic will,” one reprint of the story in the Greensboro Patriot on August 10, 1844 told that he loved his mare named Red Doe. So when Hunter jumped on her back to escape, the story states that Fanning wasted no time in pursuing him. This pursuit is where the popular story varies from the account told by Fanning, because instead of riding off into the woods to hide, Hunter rode down the banks of the river as he was followed closely by Fanning’s men. Knowing that he would not be able to escape, Hunter had no choice but to plunge “recklessly into the stream” from Faith Rock, where he was able to get to the opposite side of the river and escape.

The countless reprints and retellings of Andrew Hunter’s fabled jump to freedom made sure his story was never forgotten, and many locals claim that Red Doe’s hoof prints can still be seen on the rock where she made the fateful leap. 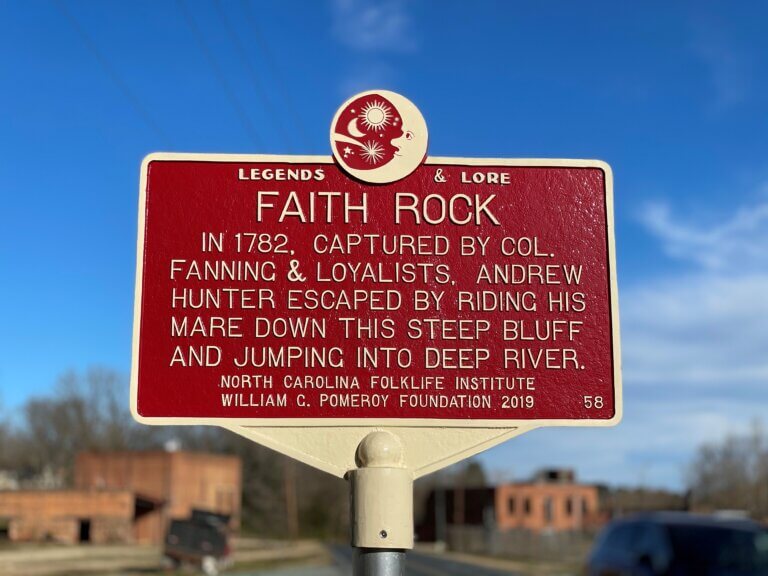 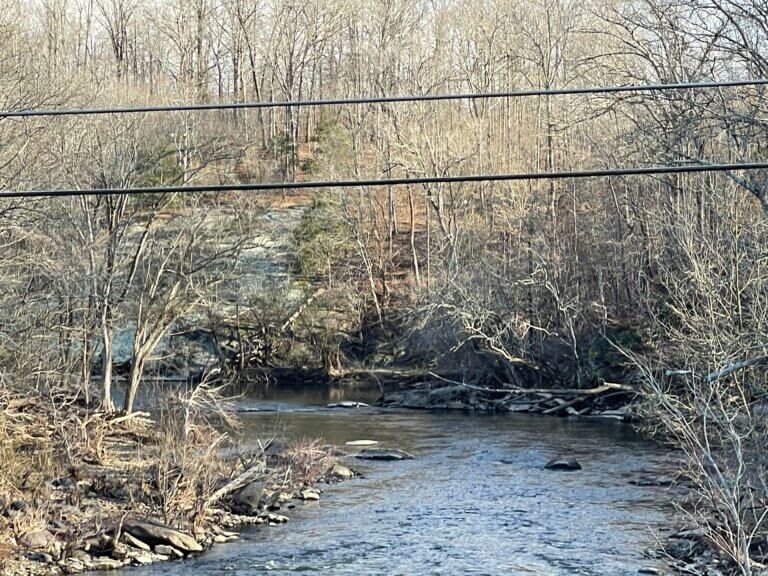 Faith Rock in the background