Felice Cohn’s significance to Nevada suffrage centers on her understanding of the law, her support of women’s rights including suffrage and her skill in lobbying to pass legislation.

According to her biography on the Nevada Women’s History Project website, Cohn was born in Carson City, Nevada on May 14, 1878. She was well educated. During her lifetime she received three teaching certificates, studied at the University of Nevada, and additionally studied law at Stanford University during the 1890s. On June 20, 1902 the Lincoln County Record announced that Chon took the bar examination and passed “one of the very best examination of any applicant in Nevada for years.” Many of her first cases, per her biography, focused on “land issues and patenting mining claims.” Throughout her early years serving as a female lawyer in a male-dominated profession, Cohn recognized a need for women’s rights and suffrage.

In 1911, Cohn co-founded the Nevada Equal Franchise Society (NEFS),  a group that advocated for women’s suffrage within Nevada. She delivered speeches which argued that women deserved to be seen as equal to men. At one such address at a suffrage meeting, the January 31, 1911 Carson City Daily Appeal reported that, “Miss Cohn, by reason of her knowledge of the law, was able to show wherein the weaker sex was discriminated against,” and additionally she “declared that women never consented to the present form of government.” Cohn continued her fight and subsequently drafted a resolution to amend Nevada’s Constitution to allow women the right to vote and “chaired the legislative committee during the 1911 legislative session” (Nevada Women’s History Project website). On March 16, 1911, the Carson City Daily Appeal declared that the Women’s Suffrage Resolution was passed by the legislature. The resulting victory for women was significant however much work was required before the new amendment could be passed. Article 16, Section 1 of Nevada’s constitution requires that any amendment must pass the legislature twice and then go to a vote of the people, which at this time consisted of men. Additionally, the state legislature only met every other year, leaving the women to wait for 18 months until it could be passed a second time. On January 30, 1913 the Carson City Daily Appeal related that the Woman Suffrage Amendment passed for the second time.

By November of 1914, the male voters of Nevada were left to make a final decision. According to the State of Nevada Official Returns of the Election of November 1914, the “Constitutional Amendment No. 1 (Suffrage),” passed with 10,939 votes for and 7,258 votes against. The women of Nevada were able to vote for the first time in local elections the following year. In 1916, women’s voting rights expanded to include county and statewide elections.

As part of the Constitutional process, the proposed amendment, intended to give women the right to vote, was sent to the states for ratification.  In order to add an amendment to the U.S. Constitution, three fourths of the states must favor ratification. On February 7, 1920, during a special session, the Nevada State Legislature became the 28th state to ratify the 19th Amendment to the U.S. Constitution (Nevada Suffrage Centennial website, 2018).

Following this triumph, as stated in her biography, Cohn continued her legal career, focusing on child labor issues, foster homes, adoption and divorces. She also continued to break many barriers for women. In 1916, she was the fourth woman admitted to practice law before the Nevada Supreme Court. Two years later, she was the first woman to be appointed as a hearings attorney for the U.S. Land Office. In 1926, she was appointed U.S. Referee in Bankruptcy for the District of Nevada and in 1934 she was appointed as the National Chairman of the Committee on Ethics of the National Association of Referees in Bankruptcy (Nevada Women’s History Project website). Cohn passed away in Reno, Nevada on May 24, 1961. 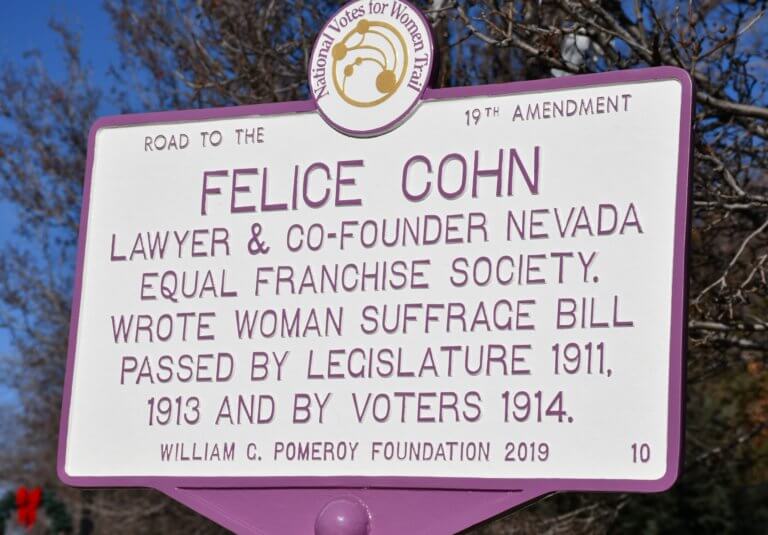