The area known as Five Corners is situated just south of the towns of Genoa and King Ferry. It marks the intersection of Hill Road, Bartnick Road and County Route 32.

According to J.H. French’s 1860, Gazetteer of New York State, Genoa was originally formed under the name Milton in 1789. The town name was later changed to Genoa in 1808. Five Corners is a hamlet within the Town of Genoa established circa 1820s. It is named for its five-way intersection of local roads. It is also the intersection of four old military tracts. A hand drawn map of Milton (modern-day Genoa) created by Jacob Hart in 1790 illustrates the land subdivided into 500 lots utilized as “military gratuity lands.” The four tracts that met at Five Corners were lots 24, 25, 33, and 34.

As Five Corners developed, so did the local economy. By 1875, per the F.W. Beers, County Atlas of Cayuga County, New York map, Five Corners had a Presbyterian Church, several cemeteries, a school, post office and a store. It also was home to, “a hardware store, two blacksmith shops, a shoe shop, a paint shop and about seventy inhabitants” by the 1870s (History of Cayuga County, New York, Elliot Storkes, 1879).

There is little doubt that the hamlet’s close proximity to Cayuga Lake contributed to its growth. On the 1875 map it is apparent that Five Corners has a direct route to Atwater, another hamlet with Genoa that is located on the shore of Cayuga Lake. Despite this, as time went on school districts merged, businesses moved and Five Corners’ population decreased. While no modern population records for Five Corners exist, the 2010 U.S. Census indicates that the Town of Genoa counted 1,935 residents at that time. 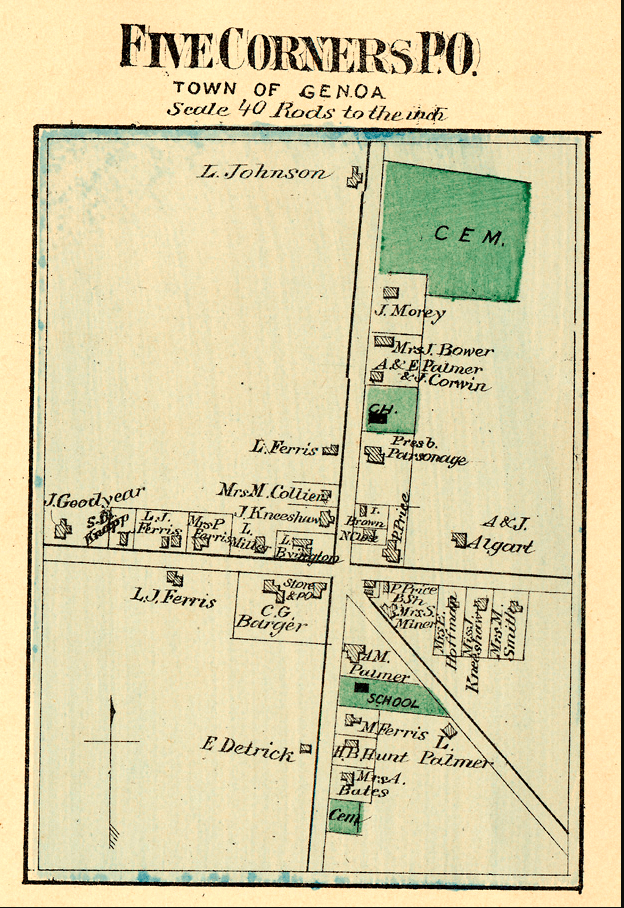