In 1826, the small community of Lyons Falls, NY was still in its infancy and lacked a place of worship. Twelve people, seven women and five men, decided to organize their own church. They met collectively at each other’s houses or the local school (1805 History of Lewis County, Franklin B. Hough, 1883). Thomas Brainerd, a native of nearby Leyden, presently a reverend in Philadelphia, visited Lyons Falls in 1853. He was inspired by the locals who met to worship at any available space. To assist them he sent plans for a suitable building to be erected and began to help raise money for the construction (1805 History of Lewis County).

The church was built on a piece of land after the Lyons Falls Waterfall where the Black River diverges into the Moose River. It was constructed before the village was completely established. The church was a small wooden building situated in a pine grove, appropriately the church was named the Forest Church (Forest Presbyterian Church, National Register of Historic Places Nomination Form, 2004). The grand opening and dedication took place on August 6, 1854.

A few decades later in 1892, the aging church was in dire need of repairs. At this point in the growth of the village of Lyons Falls, the community’s center was now located on the other side of the river from the church. It was decided that a new church should be built in the heart of the village to “better serve the people” (Forest Presbyterian Church, National Register). In the winter of 1892-1893 plans were underway for the new church. The architect behind the designs was Albert W. Fuller from Albany, NY. Fuller commenced building in July of 1863 and employed “a blend of the Shingle Style with Gothic elements” in his design (Forest Presbyterian Church, National Register). Intended to seat 250 people, it was estimated that construction of the church would cost $5,000. Final costs climbed to around $6,500, however with all the pledges the church received it was still deemed affordable (Forest Presbyterian Church Website, 2017).

On February 4, 1894, the last service was held in the old church. Following this event, it was dismantled. Salvageable pieces were re-purposed in the new church, including the old organ, carpeting, bell and windows (Lyons Falls History Association Website, 2018). The new Forest Presbyterian Church opened on February 25, 1894. The dedication ceremony was delayed until a more mild climate in July of 1894 (Forest Presbyterian Church Dedication Services Pamphlet, Lyons Falls History Association, 1894). Of the 375 people who attended the ceremony, 20 also attended the dedication for the original church in 1854. 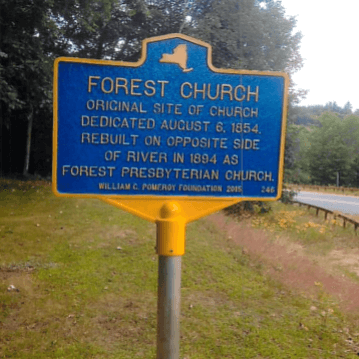