Only a few miles from this site was a small skirmish at the Manor of St. George during which the Continental forces scored a significant victory against the British. On November 23, 1780, Colonel Benjamin Tallmadge launched an attack against British troops at Fort St. George. Tallmadge and his troops successfully destroyed the fort and also destroyed large stores of enemy supplies. This victory was achieved with no loss of Continental troops.

One of the few of its kind on the South Shore, a January 24, 2019 Newsday article celebrates Fort St. George as the best-known Revolutionary War-era British fort on Long Island. The article, featuring the research of David Griffin, architect, historian and author, colorfully describes the skirmish on November 23, 1780 as a “surprise, early morning assault [whereby] Tallmadge’s men axed their way through the gate, killed several defenders and took prisoners before setting the fortification afire and leaving.” The article also observes that British forts on Long Island exist today as shadows. Especially in the case of St. George, “nothing really remains except for the outline of the redoubt markings in the grass,” Griffin explains. “It’s hard to tell it is the remains of a fort unless you know what you are looking at or it is pointed out to you.”

The fort, which is on the grounds of the Museum Manor of St. George, is operated by the Town of Brookhaven. Findagrave.com also notes that there is a small burial place on the grounds with less than two dozen graves, all of them member of the Tangier-Smith family and descendants, who lived In Long Island before and after the war. 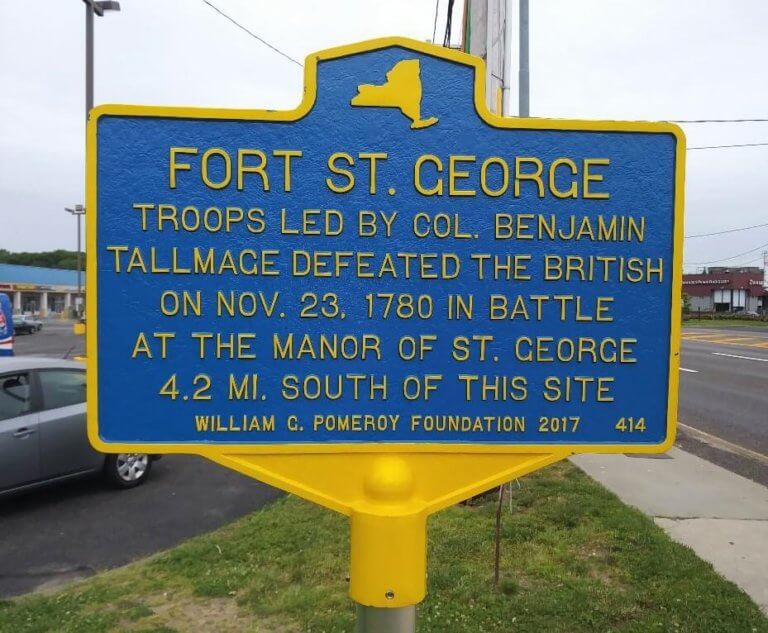