The Freeport Bank built its second location in 1905. Constructed from stone and brick and reportedly “practically fireproof,” according to a report in the Brooklyn Daily Eagle, this claim proved to be false when in April 1918 a fire broke out on the third floor. However, the building still stands.

The Freeport Encyclopedia noted that the village’s first bank had been established in 1892. John J. Randall was president and William S. Hall served as cashier. Officers included Smith Cox, William G. Miller, and William Golder. The original bank building was located on South Main Street, just south of the railroad tracks.  In 1905, when the bank outgrew these quarters, a new bank building was constructed on South Main Street, opposite its original location. This building was designed by Walter I. Halliday of Jamaica and it cost about $30,000 to build. On E. Belcher-Hyde’s Map of Nassau County 1906 Long Island, Freeport Bank appears on the east side of Main Street, four lots south of the train tracks.

A Nassau Post article dated April 5, 1918 added that the fire started at the rear end of the third story. The bank building’s copper roof did not repel flames from working their way between partitions and walls. Indeed, “this made the fire difficult for the fireman to get at, but they worked in their usual efficient and dexterous way, getting the flames under control and finally extinguished in about an hour’s time. Water had to be poured into the building in great volume.” Although the cause of the fire was not yet known at the time of article, it was noted that the second floor rooms sustained smoke damage, while other professional dental and legal office spaces were saturated with water. Despite the damage, the article also reported that the bank would return to business as normal on Monday and the building repaired at once.

In 1925, according to the Encyclopedia, the business moved to a larger premises “on the corner of Olive Boulevard ([later] Sunrise Highway) and South Main Street, a few doors south of the first bank building.” The new bank building was designed by Purdy and Davis, and D. Wesley Pine served as president. A ca. 1925 Metropolitan Aero-View Co. Map of Freeport includes Freeport Bank in the Business Directory. It is depicted on the bottom of the map as a corner building, reflecting the Encyclopedia’s description.

The Freeport Bank celebrated its Golden Anniversary in 1942. In 1957, it merged with the Long Island Trust Company. In 1967, the Long Island Trust Company opened its Banking Center at 12 Henry Street.  This center, located behind the bank building, included three drive-up windows for motorists and three walk-up windows for use by pedestrians and commuters. 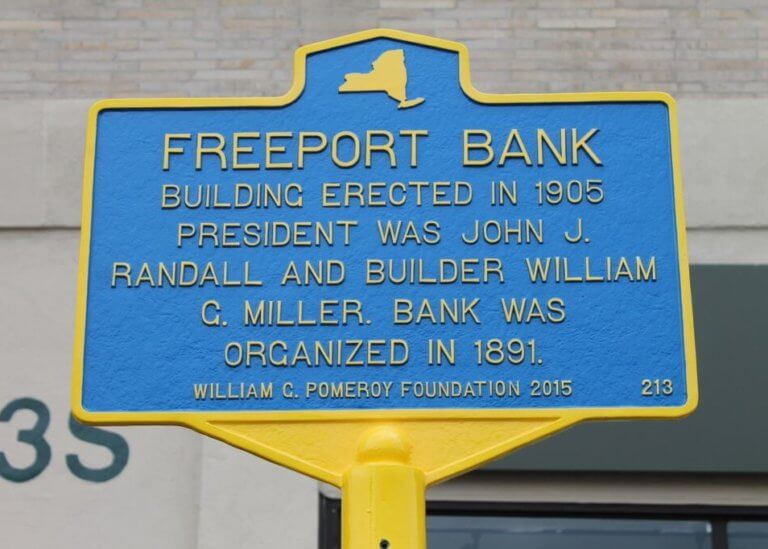