During the 19th century, a mill existed in the center of the Town of Genoa. The mill was operational for more than 80 years and was powered by the nearby dam on Big Salmon Creek.

In the early 1800s, Benoni Holcomb constructed a thirteen foot high dam in the Big Salmon Creek for the purpose of providing power to a mill he would build (Deed, Cayuga County, NY Clerk’s Office, 8 May 1866). Over next few decades, the mill would change ownership many times.

During the late 1800s and early 1900s, the mill was called Genoa Full Rollers Mills. According to an advertisement featured in The Genoa Tribune, it was known for its, “famous Perfection Flour.” Another advertisement dated March 3, 1899 in The Genoa Tribune states that the mill sold, “flour, meal, feeds of all kinds,” and specialized in “custom grinding.” In February of 1904, the mill owners incorporated under the name Genoa Milling Company. Written in this certificate of incorporation, the purpose of this company was listed as to run a milling and feed business along with buying and selling products. At this time the capital stock was $20,000.

In 1922, a flood swept away the mill dam, resulting in catastrophe as the dam was required to provide power for the mill. Rather than rebuilding an identical system, motors powered by gasoline were utilized instead (The Press, 23 Jan 1942). According to an interview conducted by The Press on January 23, 1942 with the owner of the Genoa Mill, Genoa was home to multiple milling companies. However, as machinery improved, Genoa Mill invested in new technology that added efficiency to their process, edging out slower competition. As time went on, Genoa Mill became the last surviving mill in the town. 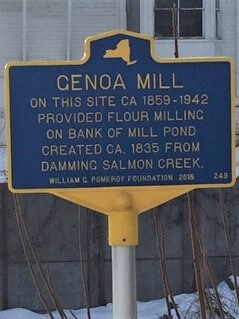 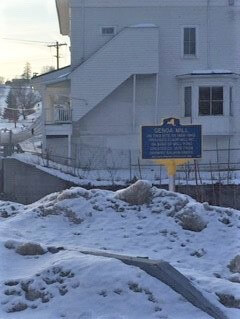