During the early 1900s, the concept of women’s suffrage in the United States divided the nation. College students and faculty played a pivotal role in advocating for the passage of a constitutional amendment that would grant women the right to vote and allow them to move up the societal ladder. One such academic institution was Goucher College, located in Towson, Maryland, just north of Baltimore.

Goucher College was originally founded in 1885 as the Woman’s College of Baltimore City by Reverend John Franklin Goucher and other Methodists. In 1910, it was renamed Goucher College after its founder (Goucher College website, 2019).  Dr. Lilian Welsh served as the college physician and a professor of physiology and bacteriology. In 1925 she wrote Reminiscences of Thirty Years in Baltimore, where she recounted her time at the school during the era of the fight for women’s suffrage. According to Welsh, Goucher College students and professors initially became engaged with the subject when they attended the National American Women Suffrage Association’s annual meeting. Held in Baltimore in February 1906, it was one of Susan B. Anthony’s last public appearances before her death (Reminiscences of Thirty Years in Baltimore). Welsh described how she realized the importance of suffrage stating “that a request to legislators would have much greater forces when we could say, ‘thousands of voters stand behind this request,’ instead of ‘thousands of women desire such legislation.” Welsh remained a strong activist for women’s suffrage on campus by holding meetings, picketing and giving speeches alongside other students and faculty.

On March 1913, the day before Woodrow Wilson’s inauguration, Welsh and around 100 Goucher College participants marched in a suffrage parade in Washington, D.C. (“Suffragette City,” Goucher Magazine, 8 Feb 2017). Welsh remarked in her book that despite college trustees not giving the student body a holiday from class, “the majority of students and a large number of the women members of the faculty” appeared marching in their caps and gowns behind, “a conspicuous banner bearing the single word, ‘Goucher.’” After this, Anna Abel, Professor of History at Goucher, attended a delegation with President Wilson to persuade him to recommend to Congress that he pass a constitutional amendment granting suffrage to women. Despite Abel’s efforts, the president refused.

On November 22, 1916, one group on Goucher’s campus hosted prominent suffragist, Inez Milholland, as recorded in The Anchora of Delta Gamma Fraternity, vol. 32 published on January 2, 1916. The group praised Milholland as being, “the great exponent of woman suffrage,” and that, “her marvelous personality fascinated the whole student body.”

In early February of 1917, the National Women’s Party organized what became known as the College Day picket. According to an article on Goucher College website, the event was, “one of the many pickets in front of the White House…to demand the right to vote for women.” Approximately 30 Goucher women attended, one of the largest delegations from any college (Goucher Magazine). A photograph caption published in the February 6, 1917 edition of The Baltimore Sun, tried to explain that these women, “went as individuals and not as representatives of Goucher.” President of Goucher College, William W. Guth, publicly rebuked the students upon their return to campus. A February 6, 1917 article in the Baltimore American quoted Guth, “this is no time to rock ship of state – calls upon college women to repudiate action of the six girls who were guilty of flaunting banners in face of President and annoying him.”  Guth believed that the President should be more concerned with World War I than suffrage at this time. This article further emphasizes that, “while the remarks of President Guth were directed at the young women who took part in the proceedings, they covered in no certain terms the whole suffrage movement , making the rebuke all the more decisive.” Prior to this event, when Guth became college president in 1913, he had “declared himself in favor of women’s suffrage” (Reminiscences of Thirty Years in Baltimore). After the war, according to Goucher Magazine, Guth, “resumed his support for the cause, eventually granting students a day off from classes on November 2, 1920, to exercise their hard won right to vote.”

As of 2019, Goucher College still celebrated the anniversary of College Day picket along with the role that students and staff had in helping women achieve the right to vote in 1920. 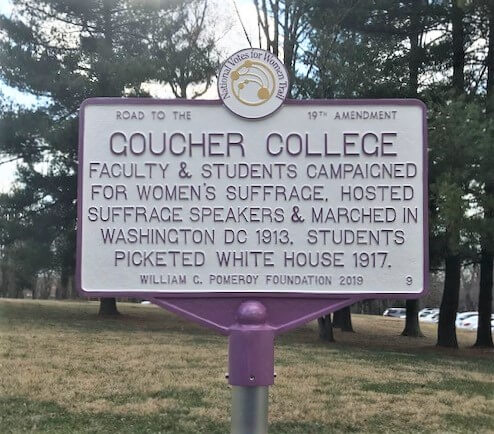 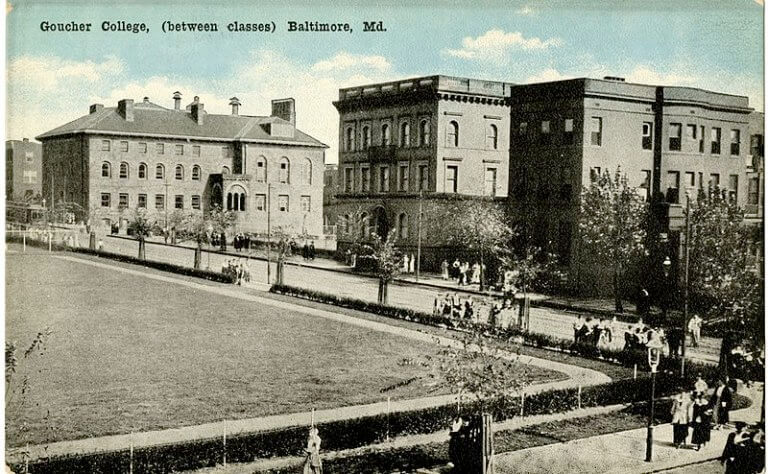