The arrival of Joseph Pahud, a Swiss businessman, to Harrisville in 1854 reversed the village’s poor fortune and it began to prosper once again. The first industry Pahud built was a grist mill in 1857. It was located along River Street, conveniently next to the Oswegatchie River, which Pahud then used to build the dam that powered the mill (Atlas of Lewis Co., D. G Beers, 1983).  According to the 1870 Industrial Census, the grist mill had $6,000 in capital, two wheels and processed corn meal, rye, oats, flour and buck wheat. By the 1880 Census, its capital had increased by $1,000, and it grew from two to four wheels (Cultural Resources Survey Report of Pahud Mill Complex, Jul 1983).

During the first years of the Great Depression, the mill was taken over by the town due to unpaid taxes. In the 1930s a local business man, Verne Wicks “having nothing so nothing to lose” leased the grist mill from the town (Cultural Resources Survey Report). By 1938, the mill was sold and dismantled for scraps. The dam was destroyed a few decades later. According to a United States Geological Survey map from 1951, the mill was no longer there, only Pahud’s chair factory remained standing. In the 1980s, the surviving remains of the site consisted of stone walls and building debris in what was once the basement. 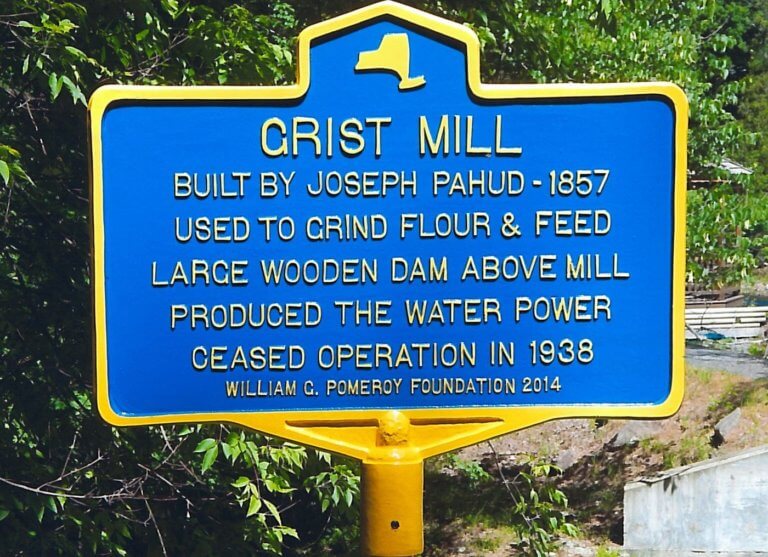