Gumaer Cemetery was established circa 1839. Peter E. Gumaer deeded the grounds to the Reformed Church of Deerpark. The earliest burials date back to the early 18th century. Listed on the National Register of Historic Places in 2017, the cemetery is credited as the “oldest European burial ground in Orange County.”

According to Findagrave.com the first settlers comprised only seven families, all refugees from Europe “for conscience sake.” The heads of these families were Peter Gumaer; Thomas Cuddeback; Thomas, Anthony and Bernardus Swartout; Jan Tys; and David Jamison. Gumaer and Cuddeback, alternately spelled “Guimar” and “Caudebec”, were members of prominent and well-to-do trading families of the trading city of Cudebec in the Province of Normandy, France. The earliest known fieldstone markers date from 1713 to 1720. Among those buried here are the earliest landowners in the Peenpack Patent, a strip of 1200 acres founded in 1697.

A New York Times article dated July 23, 1890 adds that in 1838 Peter E. Gumaer organized a meeting when the Peenpack community felt the necessity to incorporate a cemetery in their community. The outcome was that Peter, along with his wife Esther Cuddeback Gumaer, deeded the acreage of the cemetery in 1839 to the Reformed Dutch Church of Deerpark: “The 1842 deed, Orange County, NY, Liber 74 page 385, was made to the Ministers, Consistory and Deacons of the Deerpark Reformed Church in consideration of $1.”

In addition to the 2017 National Register listing, Judy Gumaer Testa, Gumaer Family Historian, adds that the site has now achieved a long-term protected status through the Gumaer Cemetery/Pioneer Cemetery Fund, fully funded by the Estate of Kenneth I. Gumaer Sr., DVM, through the Community Foundation of Sullivan and Orange Counties. It had been a long standing desire of Dr. Gumaer that the final resting place of his ancestors in Godeffroy, Deerpark Township, NY, be perpetually preserved and maintained. Dr. Gumaer held a lifelong interest in his personal and shared history with this community and subsequently with Minisink Valley Historical Society, seeing both the urgency and necessity to facilitate the care of this site. To this end, a series of Historic Cemetery Work Sessions were given in 2013 to ensure the preservation of the historic site. 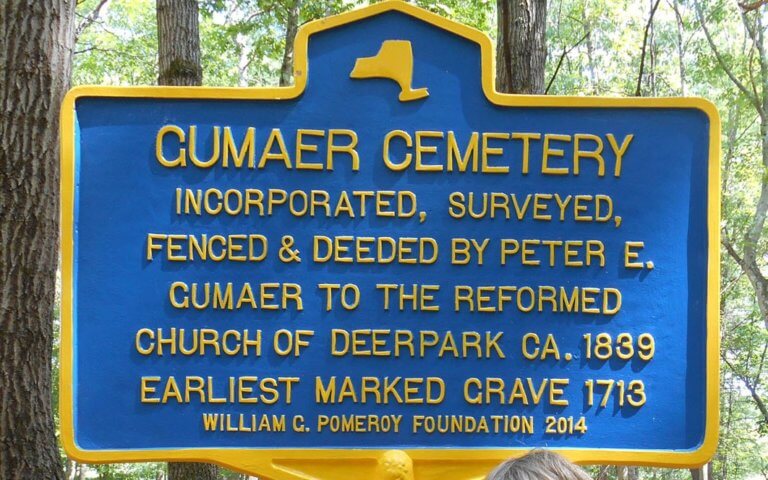