West side of Route 90 at Plaster Point Road, Springport, NY

In the early 1800s, local Philip Yawger discovered large amounts of gypsum on his property. Gypsum is a sulfate mineral that can be mined and is used in fertilizers and certain type of plasters.

According to Bicentennial History of Springport and Union Springs, New York (1976), Philip Yawger emigrated from New Jersey to Springport, NY in the early 1800s and settled on Lot 86, located on the shore of Cayuga Lake. Yawger discovered gypsum in the soil on his farm along the shoreline. At this time it was believed to be one of the only sources of gypsum in the United States. Most people obtained gypsum from Nova Scotia in Canada at a steep rate. This new discovery could provide a much less expensive, local substitute. A trade embargo was soon instituted by the United States which ceased the import of gypsum from Nova Scotia to the U.S. This prompted Yawger to experiment with his local gypsum to see if it could function as a fertilizer. He performed a trial on his fall crops (History of Cayuga County, New York, Elliot Storke, 1879). It was a success. As a result, Yawger built a thriving business in, “quarrying the gypsum and pulverizing it in the mill for use by neighboring farmers” (Bicentennial History of Springport and Union Springs, New York). The 1920 book Gypsum Deposits of the United States, by Ralph Walter Stone, notes that Yawger’s land plaster (ground gypsum) was transported by canal, river and railway to be sold nationally.

Yawger passed away in 1830 and left the business to his children. By 1942, the quarries were producing around 10,000 tons a year (Gypsum Deposits of the United States). 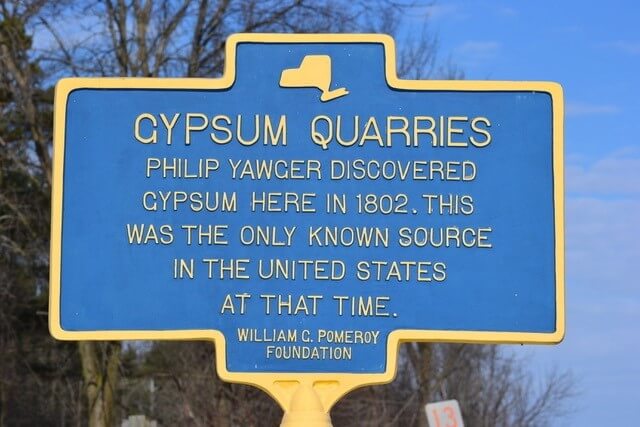 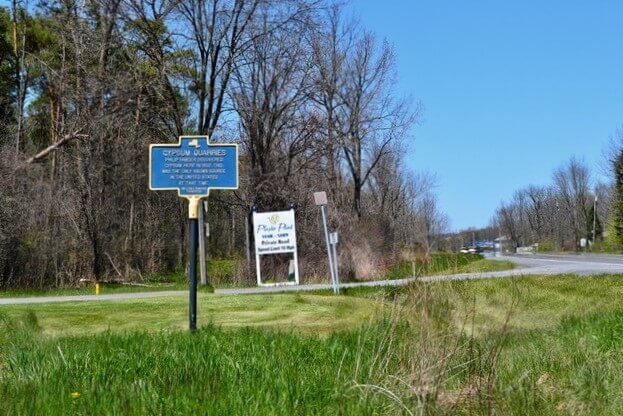