Dr. Georgia Harkness was an activist for inclusiveness, and equality of the sexes and races. She espoused ecumenism (the promotion of unity among the world’s Christian churches), and was known as a skillful interpreter of applied theology. Additionally, Harkness authored inspirational poems, prayers and hymns.

Dr. Harkness was born in 1891 in Harkness, New York, which happened to be a town named after her great-grandfather. According to Boston University’s website, Dr. Harkness’ family had been part of the Methodist Church since the time of her great-grandfather, and it was apparently at the age of 9, while attending a revival meeting, that she wanted to become more dedicated to the Church.

Dr. Harkness received a Bachelors of Art from Cornell University, and after deciding that she wanted to do more, attended Boston University and received two Masters Degrees and a Ph.D. Having furthered her education, Dr. Harkness stayed within academia, and as stated in a January 13, 1940 article from The Chicago Daily News, became the first woman to occupy a professorship at an American theological school. This position was held at Garrett-Evangelical Theological Seminary, then called Garrett Biblical Institute.

Her career as a professor and instructor was supplemented by multiple publications of works such as poems and hymns, as well as more than thirty published volumes. Those volumes were, according to the United Methodist Women’s website, “primarily theological texts focusing on issues such as ethics, the role of the church in the world, and social responsibility.” Dr. Harkness went on to continue this message as she involved herself with multiple committees and councils. In one instance, the Styberg Library at Garrett-Evangelical Theological Seminary states that in 1950 Dr. Harkness served on a committee for the National Council of Churches as they evaluated the use of atomic weapons. As it happened, she was only one of two people who “absolutely opposed their use.” Her writings even inspired Martin Luther King, Jr., who wrote her a letter in November of 1958 saying that he had “…long admired [her] Christian witness and [her] spiritual theology.”

An obituary in the New York Times reported that Dr. Harkness died at eighty-three years old in Claremont, California. She was brought back to New York and is buried at Harkness Cemetery. She is still remembered today at Garrett-Evangelical Theological Society, where the graduating women wear red shoes in honor of a story Dr. Harkness used to tell involving her great-grandmother wearing a bright red coat in spite of protests by her conservative Quaker neighbors. The women use the shoes to “remind [them] of [their] place as courageous, outrageous women, and to celebrate the rich tradition of female scholarship.”

As of 2020, the marker stands in front of Harkness Church, where Dr. Harkness was a member for nearly 70 years. 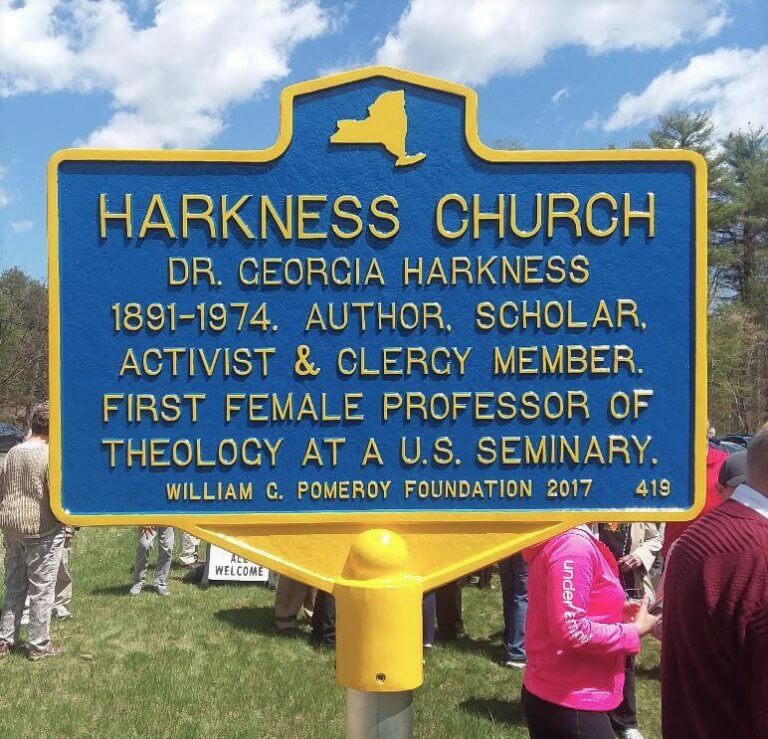 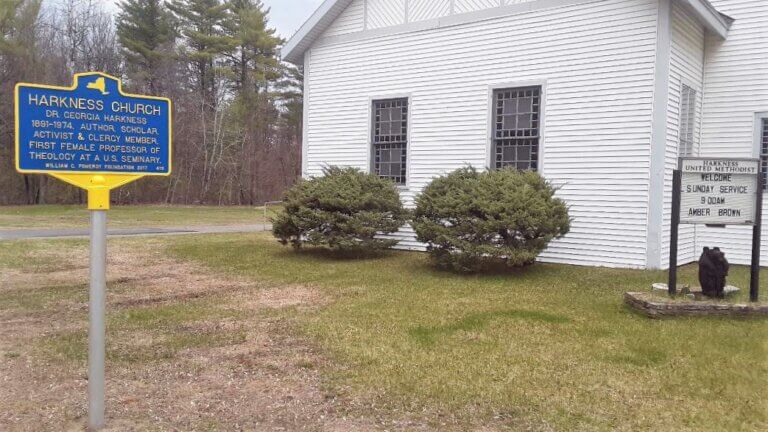