Harness racing was a popular pastime among upper class men in the late 1800s. The harness track known as the Gentleman’s Driving Park, opened around 1882 at Port Jefferson Station, New York. Popular in the summer months, this track featured numerous races.

Harness racing tracks of the Victorian era were places where gamblers went to watch men race, often counterclockwise, around an oval track behind horse-drawn carts called sulkies. Gentlemen’s Driving Park was part of a circuit of harness racing tracks in the Northeast and a member of the National Trotting Association, according to Cumsewogue Historical Society, but likely fell into neglect with the rise of the automobile.

The February 18, 1882 edition of The Signal records the purchase of a piece of land just east of William Tingle farm at Comsewogue, a portion of one of the “Long Lots” lying north of and adjoining Canal Road. The property was chosen by Port Jefferson Driving Park Association on account of its level quality, from which “with requisite amount of labor a nice track [could] be made.”

Less than two years later, the Driving Park was included in the October 20, 1883 edition of The New York Times, where some of the contemporary “contests on the turf” were described.  The most celebrated was the cup race which was reserved for horses that had never beaten 2:30. “Other trials of trotters” included the road-wagon, the best two of three with the owners to drive.

The famous horse “Echo” raced here. The Port Jefferson Times from August 2, 1884, affectionately describes the favorite horse as the “pet of the local turf, and the pride of Capt. Dickerson’s heart.” “A horse that defeats him,” the article added, “will be a good’un. It is doubtful that Solon can do it – ’tis possible that Fredonia Boy may.” Soon the August 16, 1884 edition of the South Side Signal reported on the “supremacy of trotting horses Echo and Fredonia.” Apparently left unsettled, the contest would be renewed that day at the Smithtown Driving Park. The backstory was that prior to the race Echo had been sold to Frank Edsall of New York, who afterwards informed Mr. Ticehurst that he would trot Echo against Fredonia Boy for “$500 a side.” A follow up article in the August 23,, 1884 edition reported a large crowd present at Smithtown Driving Park for the race between the rival champions. Since the column ends by stating that those backing the Port Jefferson horse were “victims of misplaced confidence,” we can gather that Echo’s long winning streak ended that day.

In 2016, in conjunction with Cumsewogue Historical Society, the Town of Brookhaven announced plans to restore the historic harness track. 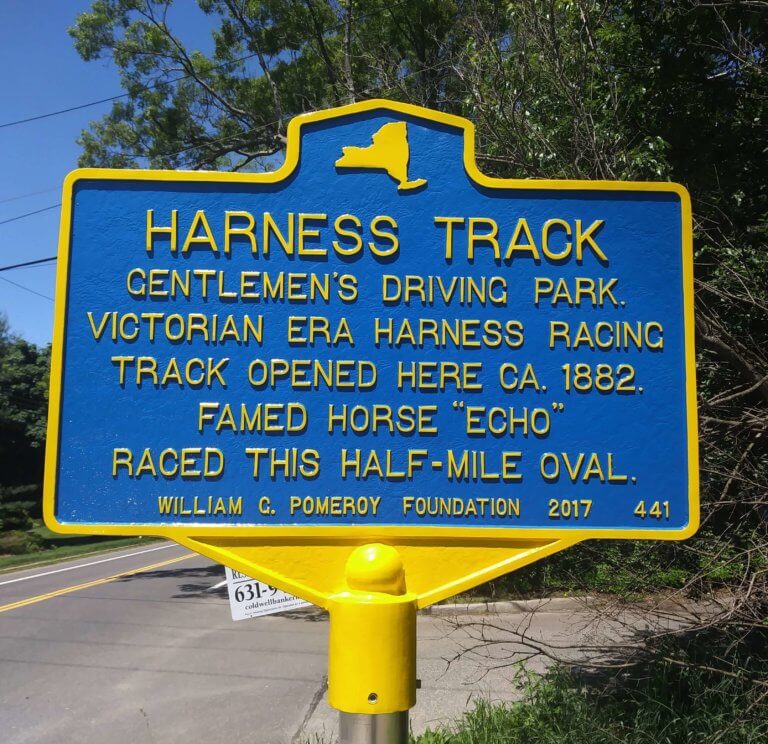