Hattie Lyon was the first woman to climb Lyon Mountain. The mountain had been named for her grandfather, Nathaniel Lyon.

Described in History of Clinton and Franklin Counties, New York (1880) as being the highest elevation in Clinton County, Lyon Mountain was also said to be covered by a dense forest with “a deposit of first-class ore” at the western base. The History also attributes the name to Nathaniel Lyon, whose story is told in a January 11, 1879 article in the Plattsburgh Republican. Declared “one of the first settlers in the town of Saranac,” Nathaniel moved to the area from Moretown, VT around 1804. He had apparently heard rumors about the land on the western border of the Champlain Valley, most notably that it had “extraordinary fertility of the soil, and wonderful resources.” To get there, Nathaniel had to move his family along the Saranac River, and he eventually settled down “about a mile and half westerly from [what became] Saranac Village.” The article states that at the time there were only two or three other families in the area in 1804.

Nathanial lived in the area until his death, but according the History, there was a short period during the War of 1812 when he returned to Vermont. Stating that he had been afraid of “danger from marauding bands of Indians,” Nathanial took his family out of the state until the end of the war. It was during this time in Vermont that Lewis Lyon was born, who would later become the father of Hattie Lyon.

As stated in her obituary from the Plattsburgh Sentinel on December 16, 1930, Hattie was born February 8, 1843 to Lewis and Joanna Lyon. Said to have resided her entire life on the family farm, she married Darius Lobdell September 27, 1896. Also recorded in the Plattsburgh Sentinel is fact that she was the first woman to have climbed to the summit of Lyon Mountain. Published on September 15, 1876, an account was given about a group of ten women and seven men who were attempting the climb not long after Hattie had finished hers on August 11. Stating that she had been “endowed with the fortitude, energy, and perseverance of her renowned grandfather,” it was recorded that Hattie made it up and down the mountain in a day. She was also said to have been accompanied by her brother.

Those men and women that made the climb after Hattie described the hike as seeming “almost like being suddenly transported to Fairy-land.” They also reported the trail to be eight and a half miles from the head of Chazy Lake to the summit, which was said to be 3,000 feet above Chazy Lake and 5,000 feet above sea level.

As of 2019, the marker stands in front of Hattie Lyon’s lifelong home. The farm can be seen marked under her father’s name, “L. Lyon,” in an 1856 map showing land ownership in Clinton County from the Library of Congress. 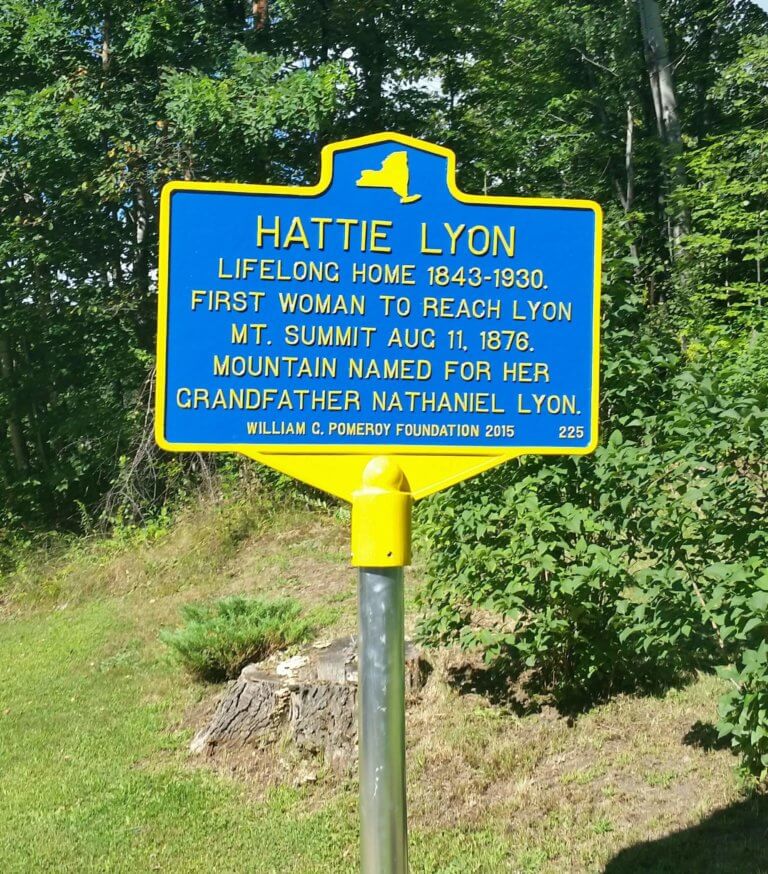