Designed in the classic octagonal style of architecture, the Hendricks House was built in 1865 for local area residents Allen B. Hendricks and his wife Anna. Since 1935 the Hendricks House has served the community as the Red Hook Public Library. Phrenologist and author Orson Squire Fowler popularized the octagonal building style during the 1850s.

According to Library history files provided by Historic Red Hook, Hendricks House is located on South Market St. (Rte. 9) in Red Hook, NY. A two-story Italianate-style octagonal building of concrete construction, it was built c. 1864-65 for Allen Barringer and Anna Rodgers Hendricks, the son and daughter-in-law of prominent local businessman and property owner Jeremiah Hendricks. The historic house was the personal residence of the Hendricks family until Allen’s death at the age of 93. As of 1935, it had served as the Red Hook Public Library, founded in 1898.

“J. Hendricks” appears twice on the 1867 Beers Maps of Red Hook, corroborating the Library’s description above. Both properties are very near to Saw Kill Creek, a 14.3-mile-long tributary of the Hudson River which passes through the southern part of Red Hook. Considering Allen Hendricks was involved in several of his family’s businesses, serving as bookkeeper for the family-owned saw mill in the 1850s, and later for the family flour mill through the 1880s, the properties’ proximity to the Creek makes sense.

The Hendricks House is a rare surviving example of the octagonal concrete form of house construction popularized in the mid-19th century by phrenologist and author Orson Squire Fowler, whose book A Home for All (1850, 1854) launched a nationwide fad for octagonal buildings. Between 1847 and 1856, Fowler built his own octagonal concrete house in nearby Fishkill, which may have provided inspiration for local builders in Dutchess County.

Farmer, Mechanic, and American Cabinet, a historical publication devoted to mechanics, manufacturers, new invention, science, agriculture, and the arts featured an illustrated “Plan of an Octagon Cottage” in its February 28, 1852 issue, a publication which the Hendricks may have been familiar. A similar plan appeared in American Phrenological Journal from the period, perhaps by Fowler himself. Both articles provided detailed carpenter’s specifications for builders, including scaled first and second story building elevations.

In addition to his work at the family mills, Allen also operated their freighting business along the Hudson River from 1861-67, the period corresponding to his marriage to Anna in 1864, and the completion of their home the following year. Allen later served as bookkeeper for the First National Bank in Red Hook, and as an insurance agent. Allen and Anna had four children who grew up in octagon house: Louise Rogers (1865), Laurence Hutton (1867), and twins Anna and Allen (1874). Anna passed away in 1920, and Allen continued to live in the house until his death in 1933.

In 1935, the Board of the Red Hook Public Library purchased the octagon house from the Hendricks heirs for $3,800. An additional $900 was used to adapt the building into a library. The building received a new roof in the 1950s on the heels of a hurricane. In the 1970s the basements rooms were remodeled in period American style. In 2011, a rear addition was added and the basement was again renovated into a children’s reading room. 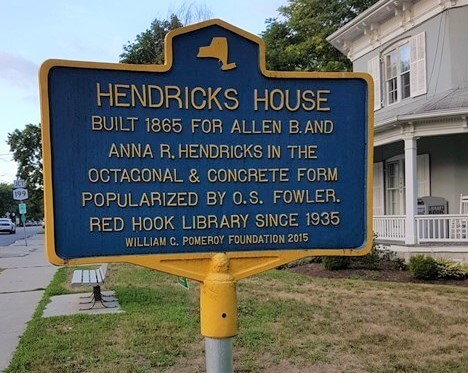 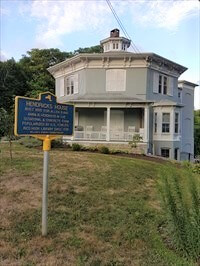