Noadiah Hubbard was a Connecticut native, born in 1756. During his early years, Hubbard served as captain of a ship, and made many trips to the West Indies. He gave up that career in the early 1790s to travel out to Genesee County, NY. Hubbard also was offered a contract for the construction of canal locks, which he accepted. He eventually settled in the Town of Steuben, NY, where he soon began a family with his wife, Eunice (The Growth of a Century, John A. Haddock, 1894).

In 1797, landowner, Lemuel Storrs, visited Hubbard, and proposed that he accompany him to the Town of Champion, “on a tour of exploration to the unbroken wilderness” (The Growth of a Century). As a result, many historians view him as the founder of the Village of Champion. In 1797, Storrs offered him 2,000 acres of land in any part of the town for $1.50 per acre. Hubbard picked his acres right in the center of town and built a log cabin (A History of Jefferson County, Franklin Benjamin Hough, 1854). Not long after, his wife and children joined him in Champion in the fall of 1799.

As time passed, Hubbard sold some of his land to other homesteaders. He also kept a tavern, an ashery and a store that offered farming tools and groceries (The Watertown Herald, 30 Aug 1890). In 1820 he built a large stone house for his family right in the center of town (The Growth of a Century). The build date was carved into the stone blocks over the front windows of the home: September 25, 1820. In 1834, Hubbard built a larger home and the former Hubbard Home was passed to his eldest son, Hiram Hubbard. Hiram and his wife, Charille Sherwood Hubbard, lived in the house until their deaths in 1888 and 1893 (1800 US Federal Census, National Archives).

The house then passed through several generations of family until it was donated to the 4 River Valleys Historical Society in November 2005. It was placed on the National Register of Historic Places in 2009. 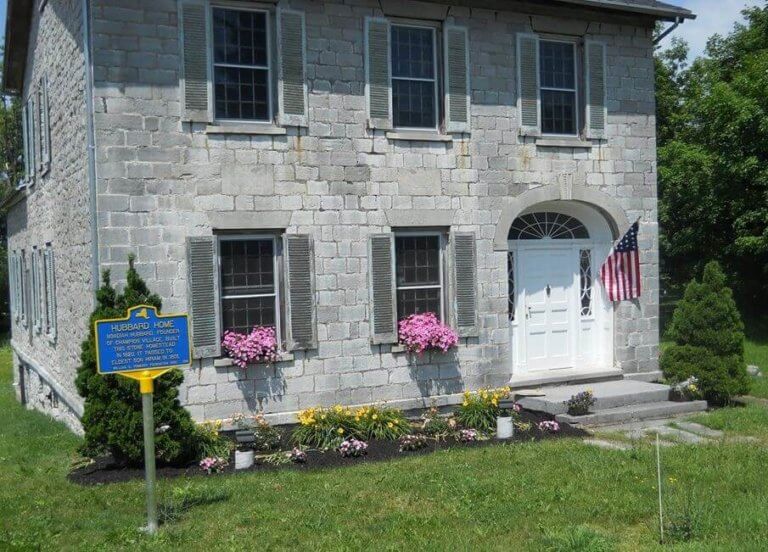