Local industry is important to the development of a community. Purchased in 1793 by Thomas Ireland, Ireland’s mill served as a saw mill, grist mill, and sold a variety of goods including feed, grain, hay, and ice. While in business, four generations of the Ireland family oversaw production at the mill until 1913. By 1915 Ireland’s Mill was torn down to make room for new development.

Long Island; a History of Two Great Counties, Nassau and Suffolk (1939) explains that Amityville was originally called Huntington West Neck South. In the early 19th century it consisted of but a few homes near the old South Road. Ireland’s Mill and Carmen’s Mill were located at the east and west ends of the early community. Given this insight, the reference to the mill within Huntington town history section of the History of Suffolk County, NY (1924) in connection with Alexander S. Gardiner, a successful farmer, is plausible. In 1868, he bought an adjoining piece of land described as “the Ireland property, running north to railroad.” This provided him with a place to expand his enterprise by unloading manure. There is also reference to Gardiner’s grist-mill and saw-mill, as well as a cider mill which was the thought to be largest on the island.

Thomas Ireland, farmer, is listed as a head of household on the 1790 census. Ireland also appears on the 1850-1880 Agricultural census. His stores included a supply of Irish potatoes, barley, buckwheat, butter, and hay. The total value of produce of market garden was $5. Given that his is the only with a value listed on the historical document, this may indicate that he was the only one selling his produce. Meanwhile the total value of his animals slaughtered was $84, which is medium compared to others. It showed that he farmed 80 acres. The cash value of his farm $3000, higher than others in his community. Value of implements and machinery was $150. From this data we can surmise that his goods sold were more agrarian agricultural than agricultural livestock. 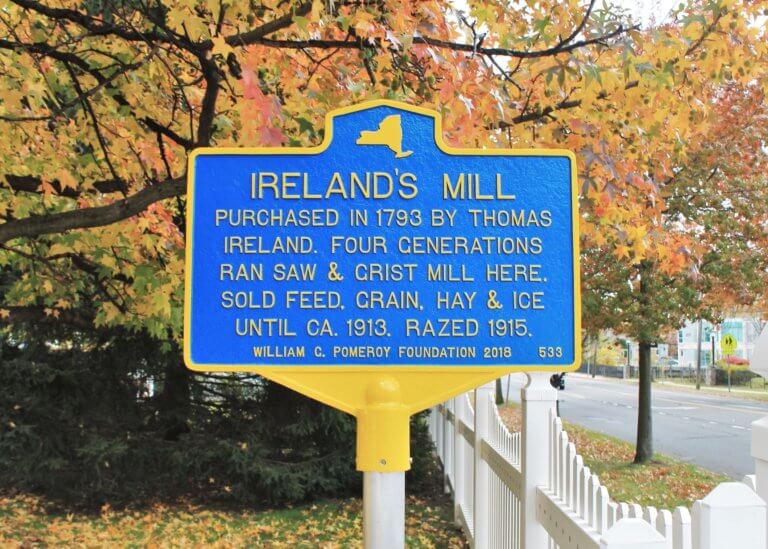